A GOP super PAC is on the air slamming Sen. Bob Casey over his vote for the Wall Street bailout. Fight for the Dream PAC, a Pa. based group, unveiled the ad Thursday. 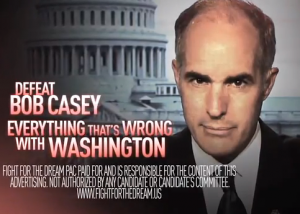 “Casey backed the Wall Street bailout that allowed millions in bonuses to insurance and bank executives, the same ones we bailed out, the same ones who tanked our economy,” says the announcer. “And now they’ve given Casey over 2 million dollars in campaign cash.”

It was first reported in Politico.

The Emergency Economic Stabilization Act passed the Senate in 2008 by a wide, bipartisan margin (74 to 25).

It’s not clear when the ad will begin to air. Filings with the FEC and the FCC do not yet reflect any television time. Media buyers from both parties told PoliticsPA they haven’t yet seen an indication of the size or scope of the buy.

What we do know is that the PAC spent $15,000 to produce the ad with Upgrade Media, a subsidiary of Dawson McCarthy Nelson Media LLC. That’s a decent price tag for a campaign ad, so it’s reasonable to expect the group to make a significant buy.

Update: a PAC spokesman says the ad will run “in select broadcast markets statewide,” and it’s a “substantial” buy. He said his PAC will disclose additional details only as require.

The group was founded by Lehigh County GOP Chair Wayne Woodman and actually helped to air an ad against Smith during the Republican primary.

It’s the second outside group this week to get involved in the race; Majority PAC, a super PAC founded by Sen. Harry Reid’s former staffer, is spending $515,000 to boost Casey.

Casey Campaign Manager Larry Smar said the ad was being bankrolled by Tom Smith’s family and his business interests. And he defended the bailout vote.

“Bob Casey has a record of supporting necessary reforms to expand consumers protections, putting the interests of consumers first and increasing oversight to help avoid another financial collapse,” Smar said.

“Tom Smith would roll back consumer protections, give a huge tax break to millionaires like himself while raising taxes on middle class families.”