Updated: The ad is up and it’s a split: 10 seconds pro-Casey, 20 seconds against Smith over education. 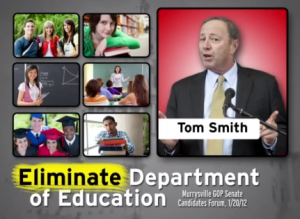 “Tea Party Tom Smith has a different plan. He would eliminate the Department of Education,” says an announcer, who argues that change would result in less money for classrooms and other perils.

“On education, Tom Smith’s not looking out for you.”

PoliticsPA is seeking comment from Smith. Republicans who favor eliminating the Department of Education usually also talk about federal grants to states, who would then have stronger jurisdiction over their own education system.

The ad was first noticed and posted by the Morning Call.

Update 2: Smith Communications Director Megan Piwowar had this to say about the ad:

“This is further evidence of Bob Casey’s sputtering campaign and crumbling support.  Tom Smith, whose wife taught in public schools for 38 years, would fight to return tax dollars to the classroom, by reducing the bloated federal bureaucracy and unfunded mandates that Casey continues to support.”

A super PAC with the aim of preserving the Democratic majority in the U.S. Senate will spend half a million dollars to protect Sen. Bob Casey, a prominent media buyer says.

Smart Media Group, a GOP ad buying firm, said Tuesday that the Majority PAC will spend $515,000 in the Pittsburgh market to buoy Casey.

PoliticsPA is seeking to confirm the buy with Majority PAC. If the group’s other ads this cycle are any indication, it’s likely to b an attack ad against GOP challenger Tom Smith

The news comes after weeks of tightening polls between the freshman Democratic Senator and Smith.

It’s the most significant investment yet in the race by an outside group, and could portend help for Smith, too. A national Tea Party-affiliated group is already spending more than $200,000 to help Smith via grassroots organizing.

The Washington Post reported Monday that Smith’s television superiority has helped to make it a race in southeastern Pa:

On Wednesday evening, Joshua Shapiro, the new chairman of the Montgomery County Commission, made the rounds at several offices in Philadelphia as well as in his county, a critical suburban stronghold for Democrats. At his last stop, Shapiro added a plug for Casey, a recognition that the senator could be in trouble. “The key for the president, and for Senator Casey, is here in the suburbs,” he told volunteers in Elkins Park.

This buy, in Pittsburgh, could be an effort to bolster Casey in an area where President Obama isn’t as strong.

Casey leads Smith by an average of 6.5 percent according to Real Clear Politics.