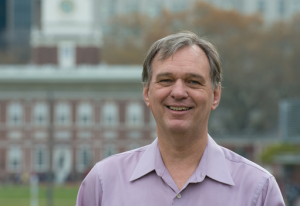 John Hanger, a Democratic candidate for Governor and former Secretary of the Department of Environmental Protection, called for big changes to Pennsylvania’s marijuana laws Tuesday.

“I am calling for immediately allowing the use of marijuana for medical purposes, reducing the penalties for possessing small amounts of marijuana to a summary offense similar to a traffic ticket by 2015, and finally regulating and taxing marijuana use by 2017 if the previous reforms are successful and monitoring the experience in states that have legalized marijuana use,” said Hanger.

His pro-legalization stance cements his status as the most progressive Democrat on the issue; he is the first candidate to release a detailed policy position about it.

According to Hanger, his three-step policy would reduce overcrowding in prisons, lessen racial discrimination in marijuana arrests, and ultimately save the taxpayers money.

The gubernatorial hopeful noted that marijuana offenses make up 46% of all drug arrests, and that 88% of those arrests are from possession. African Americans, he added, are 5 times more likely to be arrested for possession despite rates of usage matching other ethnic groups. Ultimately, Hanger portrayed it as a fiscal issue that could bring the state much needed revenue.

He’s running up against public opinion on the issue of full legalization. A Franklin & Marshall poll in May found that, although the idea has gotten more popular over the past decade, registered voters oppose full marijuana legalization 54% to 38%. Cross tabs are not available on F&M’s website, so it’s not clear the degree to which registered Democrats differ from the general election on the issue.

But a whopping 82% said the supported medical marijuana use, versus 16% who oppose it.

“Regulating and taxing marijuana could bring at least $24 million a year to state coffers, revenue that could be directed to enforcing other laws and incarcerating real criminals,” concluded Hanger.

So far, Hanger is the only gubernatorial candidate to speak up so passionately on the topic of drug reform. Whether other candidates will join him or the issue will continue to be seen as a political liability remains to be seen.

The full plan is available on the campaign’s website.