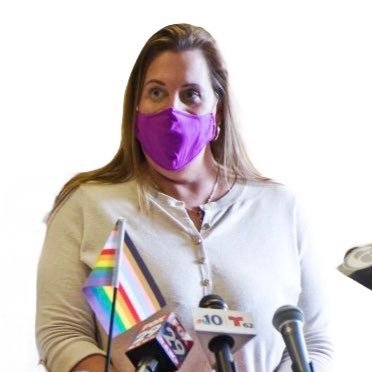 “I want to build a movement with those who have a stake in our future and have the true grit to tackle complex issues,” Alvarez said in a statement.

Alvarez is the director of community engagement at World Healthcare Infrastructures and chairperson of the Philadelphia Police LGBT Liaison Committee, per the Philadelphia Gay News. She is the first openly trans Latinx candidate for the Pa. legislature. If elected, she would be the first transgender person to serve in the state legislature.

Leading up to Alvarez’s formal announcement, Sims sent out a tweet promoting her candidacy.

LET’S MAKE HISTORY! Please join me along with civic, community, and political leaders to support @DejaLynnAlvarez as she announces her candidacy for the seat I’ve had the honor of filling in the Pennsylvania House of Representatives for nearly a decade!#DejaforPa pic.twitter.com/UTnGUseSsG

Alvarez is the second declared candidate for the seat. Jonathan Lovitz, a prominent LGBTQ advocate who served as the Senior Vice President of the National LGBT Chamber of Commerce for the past five years, announced in April.

Alvarez highlights her life experience on her campaign website, which includes over a decade in the nonprofit and public health field, while also previously experiencing homelessness.

“My platform for State Representative includes quality of life issues, infrastructure, and economic recovery,” Alvarez writes. “Over the coming months, we will address healthcare reform, homelessness, the state of our roads in Philadelphia, cannabis legalization, action to protect clean drinking water while also lowering our dependence on plastics, and policies that address economic resurgence in the district.”

In 2019, Alvarez launched an unsuccessful bid for a Philadelphia City Council at-large seat, finishing in 10th place in the Democratic Party primary.

While more candidates still may line up for the open state House seat, the current boundaries of HD182 are likely to change due reapportionment (Center City may even add a new House seat).