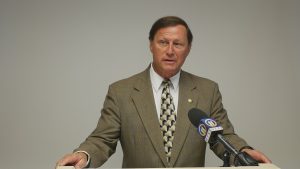 Another Allegheny County Democrat in the state House announces that he will not seek reelection in 2020.

After a report from WESA on Monday, State Rep. Bill Kortz (D-Allegheny) confirmed on Tuesday that he is not seeking an eighth term in the state House.

“It’s been an honor and privilege to serve the good people of the 38th Legislative District, and I am very proud of the success we’ve had in rebuilding and replacing several bridges and roads in the district, as well as working with Senator Jim Brewster to secure funding for the final leg of the Mon Fayette Expressway,” Kortz said in a statement. “Again, while this a difficult decision, it’s now time for me to take care of my health and provide an opportunity for future leaders to step forward.”

Kortz, who serves as the Democratic chairman of the House Game and Fisheries Commission, has held the seat in the Pittsburgh suburbs since 2007 and is widely viewed as one of the more conservative Democrats in the state legislature.

It’s the type of district the Trump GOP was built to contest. Kortz ran unopposed in 2018 and defeated Republican challenger Rod Salka by 31 points in 2016. But according to DailyKos, President Donald Trump won this district by 4.3 points over Sec. Hillary Clinton in 2016.

At least one Democrat has confirmed interest in running for the seat, while another is reportedly mulling a run. WESA reports that West Mifflin Mayor Chris Kelly is seeking the Democratic Party endorsement, while  accountant and West Mifflin Community Foundation president Nick Pisciottano Jr. said he is also considering a run for the seat.