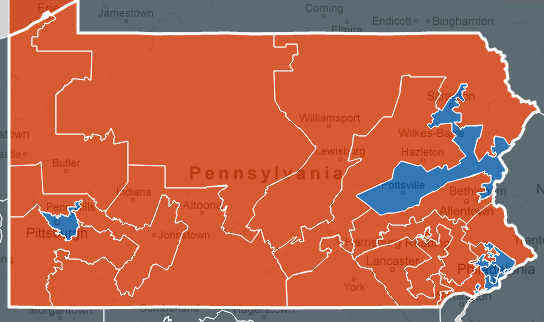 State Reps. Robert Godshall (R-Montco) and Seth Grove (R-York) want Pennsylvania to divvy ups its electoral college votes by congressional district. It’s a plan originally pitched by Sen. Dominic Pileggi in 2011 and would have nullified President Obama’s Pa. advantage had it been in effect in 2012.

In their co-sponsorship memo, they essentially concede that Pa. is no longer a competitive presidential state.

“I believe that the Congressional District Method will increase voter turnout and encourage candidates to campaign in all states rather than just those that are competitive,” the two wrote. “Most importantly, this method of selecting presidential electors will give a stronger voice to voters in all regions of our great Commonwealth.”

Read: Republicans are tired of voting for candidates who don’t win Pa.

Once a reliable battleground state, Pennsylvania spent most of the 2012 presidential campaign on the sidelines.

The plan would give one electoral vote to the winner of each congressional district plus 2 for the winner statewide.

Obama won Pa. by about 310,000 votes – 5.4 percent. But it looks like he won just 5 congressional districts, giving him 7 electoral college votes (including his 2 for winning statewide) to Mitt Romney’s 13.

Editor’s note: we’re keeping our eye on the DailyKos tabulations of presidential vote by congressional district which so far have just 4 of 18 districts. The 6th, 7th and 15th districts are the only ones represented by a Republican Congressman where Obama conceivably could have won. The most interesting so far: Romney narrowly won Mike Fitzpatrick’s 8th congressional district, 49.4 percent to Obama’s 49.3 percent.

Pileggi’s plan lost steam back in 2011 and he recently introduced a modified version that would allocate electoral votes proportionally with no relation to congressional districts.

Democratic critics note that no such effort is taking place in reliably Republican presidential states like Texas, where the same proposal would benefit Democratic candidates.