Kathleen Kane: “This is War” 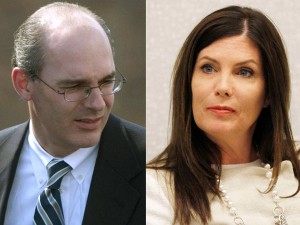 That’s how the Attorney General of the Commonwealth of Pennsylvania described her conflict with prosecutor Frank Fina and Philadelphia DA Seth Williams.

She wrote this in an email to a media strategist, as revealed by the 42-page case presented against her.

“I will not allow them to discredit me or my office,” Kane wrote in the email. “This is war.”

Kane was responding to a March 2014 article in the Inquirer about the AG’s refusal to prosecute a sting operation in Philadelphia. The source of the information for the piece was Fina.

According to Brad Bumsted of the Tribune-Review, Kane had her driver Patrick Reese look over employees’ email.

In fact, Reese was charged by Ferman for repeatedly reading emails related to the grand jury investigation of Kane.

Her deputy Bruce Beemer (who’s since been demoted) and several other top aides say she even threatened them at one point if they didn’t cooperate with her quest to find information.

“If I get taken out of here in handcuffs, what do you think my last act will be?” she stated.