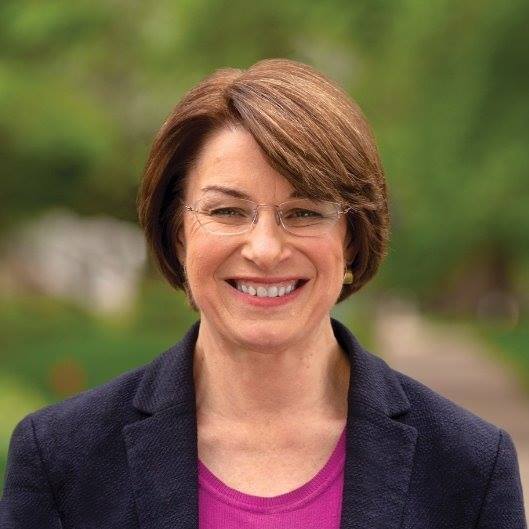 Democratic presidential hopefuls have stressed the need of recapturing Pennsylvania to win back the White House in 2020. Sen. Amy Klobuchar (D-MN) is the latest candidate to make a swing through the state by kicking off her “Blue Wall” tour that includes campaign stops in Pennsylvania, Michigan, and Wisconsin, which all previously voted for President Barack Obama twice then flipped to President Donald Trump in 2016.

“We cannot win this election without this strong blue wall,” Klobuchar said on Wednesday morning at the Pennsylvania Democratic Party’s Philadelphia headquarters, according to the Philadelphia Inquirer. “And my case that I will be making out there for me is that I’m someone who has won those voters.”

We need to win Pennsylvania, Michigan and Wisconsin in 2020. That’s why I’m on this Blue Wall tour. https://t.co/q0GuLl6vL6

In a release promoting her “Blue Wall” tour, she detailed the key issues at hand in the upcoming election were “investing in infrastructure, strengthening our rural and agricultural communities, and laying out an optimistic economic agenda.”

Klobuchar, who was one of the six Democratic presidential hopefuls who participated in the first ever AFL-CIO Workers’ Presidential Summit in Philadelphia on Tuesday evening, pushed her trillion dollar infrastructure plan and echoed the sentiments of her release about the tour emphasizing that the Democratic nominee has to make visiting Wisconsin, Michigan, and Pennsylvania a priority.

After holding a press conference at the PA Democratic Party Headquarters in Philly Wednesday morning, she made two campaign stops in Pittsburgh to tour a Carpenters Training Center and meet with supporters at Stack’d Burgers in Oakland.

Klobuchar believes that Trump lied to the voters of these key swing states to earn their vote in 2016 and believes he is not treating them correctly.

“He’s treating the people in this state like poker chips in one of his bankrupt casinos, and if we’re not careful, he’s going to make this country bankrupt,” Klobuchar said to reporters in Pittsburgh, according to the Pittsburgh Post-Gazette.

The Republican National Committee said that Klobuchar is not the “Midwestern moderate” that they think she claims to be and touted Trump’s economic record as a reason the state will vote for him again in 2020.

“Amy Klobuchar once had a carefully crafted façade as a Midwestern moderate, but her agenda would rob hard-working Pennsylvanians out of money in their paychecks and jobs across the state,” said RNC Spokesperson Christiana Purves. “President Trump has continued to fight for higher wages and job growth, and Pennsylvanians aren’t looking to end the ongoing success.”

This was Klobuchar’s first swing through Pennsylvania as a declared presidential hopeful, but assured reporters that this was not the last that they would see of her.

“We’re getting around and I’m going to do more and more visits to Pennsylvania,” Klobuchar said to KDKA. “I think part of this is you got to have a presidential candidate that doesn’t see this area of the country as fly-over country. You want to have someone that’s actually going to go to medium-sized towns and small towns. I’m on the agriculture committee which includes both forestry as well as agriculture, so I get those issues.”

The Pennsylvania Democratic Party will not endorse a candidate in the primary, but believe that Klobuchar’s message of focusing on Pennsylvania and “blue wall” states is important to finding a path to victory against Trump.

“In 2016 in many respects … we as a Democratic Party did not have a real message to small-town and rural Pennsylvanians,” PA Democratic Party Vice Chair and state Sen. Shariff Street said, according to the Philadelphia Inquirer. “Pennsylvania has long been a blue wall protecting the rest of America from insanity and we will return to be that in 2020.”

Former Vice President Joe Biden has remained the leader in national polls and in Pennsylvania, while Klobuchar has found herself more towards the middle of the crowded field. An Emerson College poll conducted in late March didn’t have Klobuchar place garnering more than 0% of the vote in the Democratic primary in Pennsylvania. A Morning Call/Muhlenberg College poll conducted in April had Klobuchar in seventh place with 3% of the vote in the state’s primary. The August Franklin and Marshall College poll did not have Klobuchar registering more than 0% as well. The Real Clear Politics Average of national polls has Klobuchar registering at 1.2%, putting her in 9th place in the crowded primary.