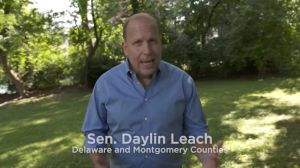 State Senator Daylin Leach (D-Delaware) made it official over the weekend, he is entering the race to challenge Congressman Pat Meehan (R-Delaware).

“Today, I officially declare myself a candidate for Pennsylvania’s 7th Congressional District,” Leach said in a release.

“Initially, I was reluctant to run. But since last year’s election, voters, party and community leaders, representatives and leaders of advocacy and resistance groups and progressive organizations, and many others from across the congressional district have been urging me to run.”

Leach released a video along with his announcement.

Leach was first elected as a state Representative in 2002, then to the state Senate in 2008.  He ran for Congress in 2014 in the 13th district.  Leach came third in a four person primary after raising the second most.

“We welcome [Leach] and the other five left-wing Democrats looking to challenge Congressman Meehan to the race and look forward to the exchange of ideas,” campaign spokesman John Elizandro wrote in an email.