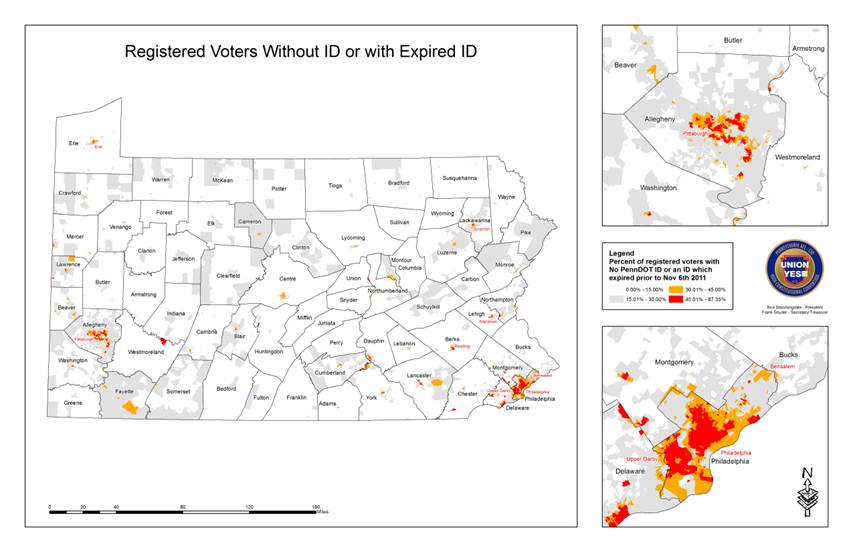 New information compiled by the AFL-CIO last week gave us a little more insight into the Voter ID numbers in the state. This week they also provided the full lists of congressional, state Senate and state House districts and how they would be impacted by the new voter ID law. And now we have the map.

The original estimate given by the Corbett administration said that only 1 percent of people would be affected. That was later amended to give a higher number of 9.2 percent, or 758,000 people.

Then, last week, the AFL-CIO said the number is closer to 20 percent, or 1.6 million. The information came from compiling and cross-referencing people who don’t have driver’s licenses and people whose licenses will have expired before Election Day.

Closing arguments in the case against Voter ID law are wrapping up today. Although the ruling won’t be final, such testimony and evidence that over 1 million people may not have an ID – and may not be able to get it in time – is making waves.

Especially given testimony by Secretary of State Carol Aichele, who said that “I don’t know what the law says” –  or how it works or how many will be impacted.

Even if the number isn’t as high as estimated, it is almost certainly higher than 758,000 – and, as the map shows, at a higher concentration in Allegheny and Philadelphia.