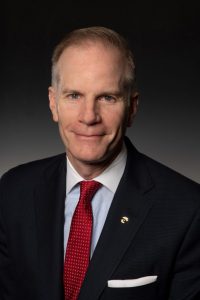 Former U.S. Attorney Bill McSwain is running for Governor in 2022 and wants former President Donald Trump’s endorsement, according to a newly released letter.

On Monday evening, Trump issued a statement accompanied by a link to a letter that McSwain sent to him in June criticizing the way the 2020 presidential election was conducted in Pennsylvania, followed by a request for his support in the 2022 race for Governor.

“President Trump, you were right to be upset about the way the Democrats ran the 2020 election in Pennsylvania – it was a partisan disgrace,” McSwain wrote in the letter to Trump on June 9. “The Governor, the Secretary of the Commonwealth, and the partisan State Supreme Court made up their own rules and did not follow the law.”

“Even worse, the State Attorney General, Josh Shapiro – the very person responsible for the enforcement of state election law – declared days before Election Day that you could not win the election,” McSwain continued. “It would be hard to imagine a more irresponsible statement by a law enforcement officer, especially during a hotly contested election. In light of such statements, it is hardly surprising that many Pennsylvanians lack faith in our state’s election results.”

“Mr. President, public service is in my blood, and I would like to serve the people of Pennsylvania and restore conservative leadership to our state,” McSwain wrote. “I will be the Republican candidate for Governor with the best chance to win the general election in November 2022.”

“Based on my background and experience, I am uniquely positioned to defeat Mr. Shapiro (the likely Democratic candidate) and would welcome the chance to discuss this with you in person,” McSwain continued. “I would be honored to have your support.”

McSwain, who served as the U.S. Attorney for the Eastern District of Pennsylvania from 2018-2021 under Trump, also claimed in the letter that he wanted to investigate “allegations of voter fraud and election irregularities,” but Attorney General Bill Barr “instructed” him not to issue any public statements about “possible election irregularities.”

McSwain acknowledged the letter on Twitter late Monday night and took another shot at Shapiro over how the matter was handled.

The Pennsylvania Democratic Party issued a statement on Tuesday morning slamming McSwain over the letter and accusing him of lying.

“Bill McSwain’s words are clearly meaningless — one day he’s Pat Toomey’s protege and the next he’s Donald Trump’s lackey,” said Pennsylvania Democratic Party spokesman Brendan Welch. “Either McSwain is lying to Donald Trump because there aren’t any credible allegations of fraud, or he lied to Pennsylvanians when he refused to do his job as U.S. Attorney. McSwain’s letter raises many more questions than it answers — but one thing we know for sure is that Bill McSwain is lying to someone.”

McSwain launched the Freedom PA PAC in March, which was a step closer towards running for Governor.

He has not formally announced his candidacy yet, but has been traveling the state and attending various events with other potential GOP statewide hopefuls.