When you have a hit that moves numbers, don’t get fancy. That’s the takeaway from Democratic challenger Manan Trivedi’s latest TV ad, the second which hits Rep. Jim Gerlach (R-Chester) over a 2001 state Senate vote to boost his pension. 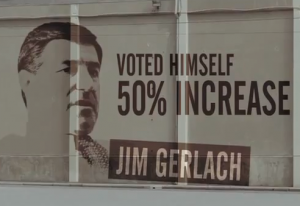 “When this plant was shut down, my parents didn’t just lose their jobs. Their pensions were wiped out too,” Trivedi narrates.

“So when our Congressman has two taxpayer funded pensions on top of his salary, votes to increase his pension by over fifty percent then votes to raid the Social Security Trust Fund and gut Medicare, I think that’s wrong,” he says.

It’s a criticism of Gerlach, who has faced more top tier challengers than any other Pa. member of Congress. Trivedi used the same attack in his first TV ad.

The Medicare charge is also familiar; several Democrats this cycle have cited the same Wall Street Journal claim that the House GOP budget would “essentially end Medicare.” This is what FactCheck.org wrote about that very citation: “That partial quote dishonestly truncates what the newspaper actually said. The Journal reported that Medicare would essentially end ‘as a program that directly pays those bills.’ But bills would still have been paid, indirectly.”

Gerlach campaign Senior Adviser Vince Galko said it was Trivedi who is a threat to Medicare.

“Trivedi was a strong supporter of the vote to raid more than $700 billion from our seniors Medicare,” Galko said, referring to the Democrat’s support for Obamacare. “In fact, he said it didn’t go far enough.”

The $700 billion Medicare claim likewise has been refuted by FactCheck.org, which wrote: “Republicans claim the president’s $716 billion “cuts” to Medicare hurt the program’s finances. But the opposite is true. These cuts in the future growth of spending prolong the life of the Medicare trust fund, stretching the program’s finances out longer than they would last otherwise.”