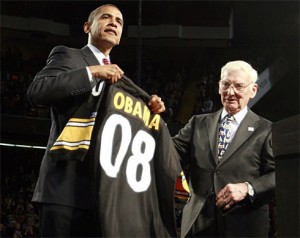 President Obama today made his 13th visit to Pennsylvania since taking office, including one of several to Pittsburgh. He talked about the nation’s manufacturing policy at Carnegie Mellon University – and it’s likely he didn’t choose the venue by accident.

Two recent polls indicated the makings of a swing region.

Democrats point to the latest Quinnipiac poll, wherein Obama’s numbers have rebounded from negative territory and are dead even at 48 percent approval, 48 percent disapproval. That survey shows southwest PA (not including Allegheny) with the tightest margin of any region in the state: 48 to 51 percent approval to disapproval.

It comes as little surprise then that Obama has heavily courted the area since his election – despite his comfortable 10 point margin of victory in 2010. From little things like ordering Pamela’s pancakes for the White House and rooting for the Steelers, to big things like choosing Pittsburgh for the G-20 summit and naming Steelers owner Dan Rooney as Ambassador to Ireland, Obama has kept up his charm offensive in the Steel City.

And while the Keystone State isn’t necessarily key to Republican strategy, a GOP win here would be a major setback for Democrats. Conventional wisdom dictates that a Dem can’t lose PA and win the White House.

The voters of the area, so-called Reagan Democrats, have swung back and forth for decades.

From 2000 to 2004, Republicans managed to flip Cambria and Greeene counties into their column (and won Westmoreland County each time). Democrats held on to Allegheny, Beaver, Fayette and Washington counties both years.

In 2008 only Allegheny and Cambria went for Obama; John McCain won several counties in the region by a margin of 1-2 points. The late Rep. Jack Murtha made headlines and drew intense criticism when he hypothesized that Barack Obama’s race would be a detriment to his performance in the area – but privately, political operatives on both sides acknowledge that race will play a roll.

Democrats rely on a significant boost in Allegheny County (along with Philadelphia) in order to outweigh GOP votes in other parts of the state.

“Our campaigner in chief will probably visit Pennsylvania a number of times,” said Gleason this morning.

There’s no “probably” about it.