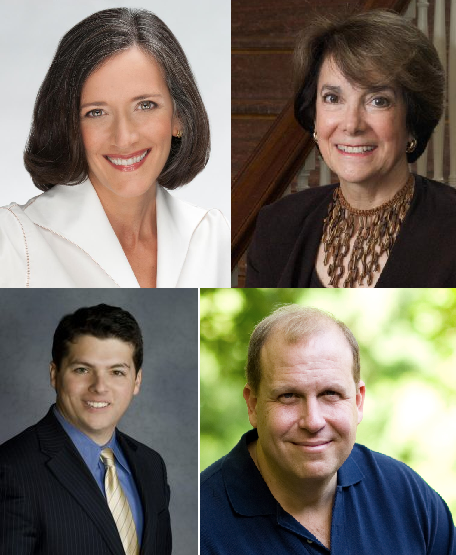 If you came for a show, you were not disappointed.

The focal point of the debate was the perceived front-runner Marjorie Margolies. Margolies had yet to appear at any candidate forums and has been criticized by her opponents for skipping out. The former Congresswoman is also in-laws with Bill and Hillary Clinton, giving her a natural advantage. Add to all this the recent report that Margolies used her charity to benefit herself and it’s fair to say all eyes were on her.

The former Congresswoman started off with a short response on education to start off the night and it was soon clear why. Margolies was not 100% healthy and it was painfully obvious as her voice was hoarse at best and shot at worst.

When asked the expected question about her 1994 proposals for Social Security reform, she answered that twenty years ago she felt everything needed to be put on the table but she is now against controversial changes to the program.

While she got the chance to highlight her famous 1993 vote for the Clinton budget she was also put on the spot by moderator Dave Davies about the Huffington Post report (some of the lights even went out as Davies was asking the question as if foreshadowing what was about to happen to the candidate).

Davies asked whether Margolies had voted to raise her own salary.

“No, I recused myself from any votes that had to do with my salary,” she responded before going on a rambling answer about the allegation that she intended to live in her charity’s headquarters. “The Huffington Post piece is just not true,” she concluded.

In her last answer, Margolies suggested that all the candidates directly declare their opposition to independent expenditures even though by their very nature those groups are not connected to a candidate. When Davies pointed this out, Margolies responded that some candidates had wealthy, powerful supporters.

“You have some powerful friends,” Davies retorted to the laughter of the crowd.

By the end, you almost began to feel sorry for Margolies…then she gave her closing statement. In a blistering, pre-written (she read from a notepad) closing statement Margolies straight cold-cocked each one of her opponents.

Saying that PA-13 deserved a representative who was “100% pro-choice” she brought up ratings from Planned Parenthood that questioned Boyle’s stance on abortion. She also hit him for suggesting there is something wrong with being a millionaire.

She then targeted Leach for his support of legalizing marijuana and brought up a Philadelphia case where the murderer was high. Leach’s puzzled reaction, which involved indescribable facial contortions and throwing his hands up in the air, made the night.

Finally, Margolies simply stated she was not confident in Val Arkoosh and questioned her support of a single-payer health care system.

If Marjorie had the toughest night, then Brendan Boyle wasn’t too far behind.

When it came to his turn, Davies pushed Boyle on his vote for Act 121, which has angered pro-choice advocates. Just like in his interview with PoliticsPA, Boyle answered that he “fully supports Roe v. Wade”. He also noted that the Southeast Pro-life Union has targeted him and that he voted with Planned Parenthood on twelve of the fourteen votes that they tracked.

He did however conceded to somewhat changing his views. “I don’t hold the same views at 37 then I did in my early 20’s” he said. He also noted that a majority of Democrats also voted for Act 121 and additionally denounced the “house of horror” run by Kermit Gosnell.

Boyle did have one defining moment in his closing statement, though, when he had the opportunity to answer Margolies’ charges. “One of the candidates on this stage has a famous relative that will come to campaign for them,” Boyle stated in the thinnest of veiled shots at the Clinton in-law. He then went on to talk about how he was fighting for his own relative, his father, a janitor and SEPTA employee.

“This race is not about Bill Clinton, it’s about Frank Boyle,” he declared.

Meanwhile, Val Arkoosh made the fewest waves last night, which is likely just the way she wanted it.

She cited her work in the healthcare sector dealing with various department chairs as examples that she could lead and cited foreign oil and natural gas as a threat to U.S. national security and the environment during the foreign policy discussion.

Arkoosh easily handled Davies question about her lack of political experience (I asked her this last week and she gave a similar answer).

“Congress right now is full of people that are career politicians and that’s not working out so well,” she stated.

The closest she came to a shot at her opponents was when she said that Congress wasn’t just “the next rung on the ladder” to her.

“I’m doing this for you,” she asserted.

Last but certainly never least was Daylin Leach. The State Senator was the first to go after Margolies on the question of Social Security. While stating that they were friends, they even watched the 2012 election returns together at Leach’s house, Leach made clear that this was “an area of real difference” between them.

Leach went on to say that Margolies’ 1994 plan would raise COLA’s on 80% of seniors and increase the retirement age to seventy. In a particular ingenious jab he pointed out “When you voted against the Clinton budget the first time, you said one of the reasons was there weren’t enough benefit cuts.”

The energetic candidate also had a great answer when asked how he would maintain constituent services.

“The 13th district is not a district where you have to spend all your time raising money. Unless that’s what you want to do. That’s not what I want to do,” he explained, predicting his constituents were more likely to get sick of him than feel his absence.

At another point when Davies asked each candidate if they would make any restrictions on the campaign contributions they would accept Leach responded, “There are a number of groups that I won’t take money from but to be fair they don’t want to give me any money.”

Finally, when the moderators decided to ask one more question, Leach’s expression and body language resembled a kid being told he could get ice cream.

Despite the rancor, there were some issues the candidates did all agree on. For example, all four supported a pathway to citizenship for undocumented immigrants and even voiced support for gun control.

When asked to name a public figure they each admired Margolies chose Elizabeth Warren, Arkoosh went with Donna Edwards, Boyle cited Daniel Patrick Moynihan, and Leach once again spoke about his hero, and his daughter’s namesake, William Brennan.

Finally, Davies did an exceptional job as moderator, getting each candidate out of their comfort zone, and setting the stage for the fireworks that ensued.