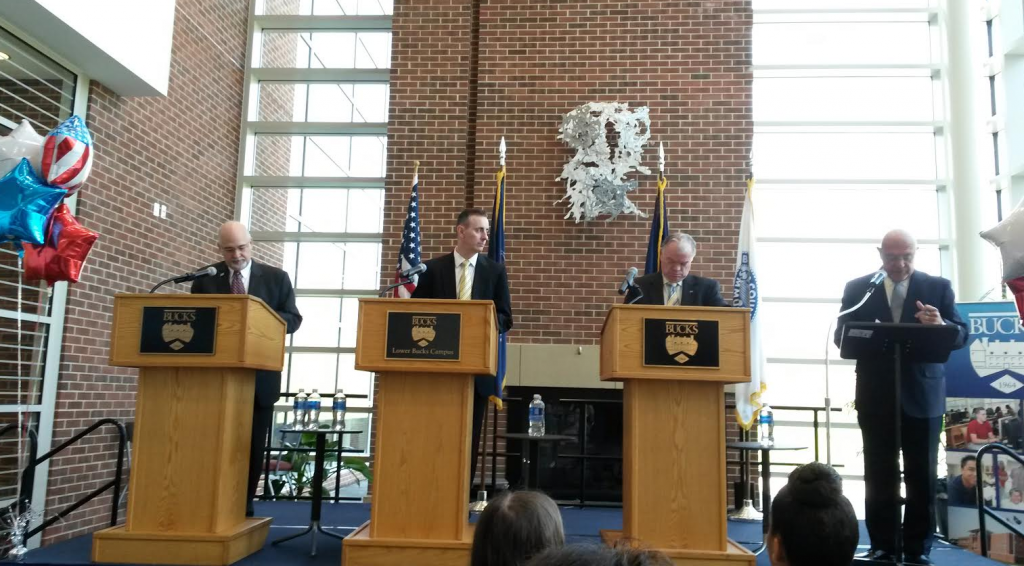 At the Lower Bucks County Community College campus on Thursday morning, the three Republican hopefuls in the open PA-8 contest gathered for a debate.

The man with the most to gain and the most to lose in this setting was Brian Fitzpatrick.

The good news is Fitzpatrick is expected to easily win the GOP primary, the bad news is it will be due to his last name, as he is the younger brother of retiring incumbent Congressman Mike Fitzpatrick.

This dynamic was made clear to me when talking to an attendee who had worked at the school for decades. He said he knew most of the candidates and had a relationship with Mike Fitzpatrick going back three decades.

So he knew Brian Fitzpatrick? Nope, in fact, he didn’t even find out what his first name was before arriving. That moment epitomized the gift and curse that is being the “Other Fitzpatrick”.

In fact, he started the event just as his brother would claiming that this would be less of a debate and more of “a conversation between us and the voters”.

It turned out that he would be right.

When asked why the primary contest had been so quiet, Fitzpatrick condemned the “mudslinging” on the other side. Additionally, his use of “Democrat” instead of “Democratic” when referring to the other party shows he is already well versed in the GOP’s language.

Moderator Bill Pezza pressed the candidates to choose one of the three Republican presidential candidates even though he predicted they would all dodge a straight answer. Of course they all did, although Fitzpatrick criticized the tone of the GOP contest.

“Quite frankly it’s unbecoming of our country and it’s embarrassing to our country overseas I can tell you that,” he stated.

When asked about the FBI’s dispute with Apple, the former agent asserted that privacy and security were not mutually exclusive.

The subject soon shifted to friendly terrain, foreign policy, as Pezza noted the fifteen year battle in the Middle East. Instead of talking about the world, though, Fitzpatrick focused his answer on the homeland, mentioning the border and praising the police.

“We need a foreign policy that is based on facts and logic and not on political correctness,” he continued, joining those who believe leaders have been too soft on Islamic extremists.

The former FBI agent also called American military spending “anemic” and asserted that it makes up only 4% of GDP.

Fitzpatrick’s most bipartisan moment came when he denounced the Supreme Court’s Citizens United decision and called on the Senate to hold confirmation hearings for President Obama’s nominee Merrick Garland.

He even went so far as to accuse the Senate Republicans of “childish behavior”.

The new-comer fielded a few more questions, saying that cutting fraud would reduce spending and that he was “suspect” towards TPP. He even used his closing statement to praise his opponents.

The one error he made, however, was when he was not speaking. Unversed in political theatre, Fitzpatrick would often make faces whenever the spotlight wasn’t on him. It happened enough times that some poor intern at the DCCC is going to be tasked with finding the worst freeze frame that can be used for negative ads and mailers in the fall.

Besides that, though, the candidate did nothing to weaken himself which is always the priority of a front-runner.

Perhaps that is because, as he put it in his opening statement “I’m not a politician, I’m not related to a politician.” That would be his only shot at his opponents…for awhile.

The neuropsychologist would go on to take Apple’s side in the dispute with the FBI and dismiss a wall on the Southern border as too expensive.

Duome also feels the Obama Administration is abandoning America’s allies, mentioning Israel and India. He even name-dropped Taiwan, showing he has his finger on the pulse of 1956’s electorate.

He saved his attacks for the end, however, since he received the final closing statement. Duome called Warren a flip-flopper for switching parties and said there was “a cloud over” Fitzpatrick’s campaign because of “allegations of illegal activity”.

The most animated candidate, though, was definitely Andrew Warren.

From the start, when Duome and Fitzpatrick were struggling with the microphones, Warren knew to project his voice so the whole room could hear. He also would frequently make gestures with his hands, a sure sign of an experienced politician.

Nonetheless, Warren praised the tone of the GOP contest especially compared to the Democratic primary.

“I suspect they’ll be a lot more electricity in this room after twelve o’clock then there is right now,” he accurately predicted.

He went on to be very critical of Donald Trump.

“Should he be successful my concern is what lesson it gives to the electoral process,” he said while lamenting that people were losing their faith in the politics and government.

A charismatic figure, Warren was able to elicit laughter from a relatively quiet crowd. There seemed to be only a few disruptive attendees, namely a couple of old ladies who continually commented on the proceedings to each other. They were of course seated directly behind me.

Altogether, the debate was rarely eventful which must have been a relief to the local GOP.