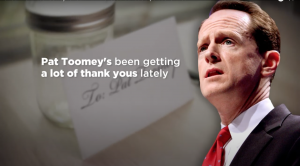 The Pennsylvania Democratic Party is on the attack over Sen. Pat Toomey’s role on the five member Congressional Oversight Commissioner established by the CARES Act.

On Monday, the PA Democratic Party released a digital ad titled, “CEOs Thank Pat Toomey for COVID-19 Bailout that Put Corporations First” on YouTube, citing an April 28 story from Politico on the growing rift between Toomey, who was tapped to serve on the commission by Senate Majority Leader Mitch McConnell, and Bharat Ramamurti, a former aide to Sen. Elizabeth Warren selected for the oversight panel by Sen. Chuck Schumer.

Politico reported that Ramamurti says that the Federal Reserve should “restrict stock buybacks and executive bonuses for big corporations that get loans. Midsize businesses should also face other conditions like limits on outsourcing.” Toomey disagreed with Ramamurti’s assertion. “The Fed’s role is to comply with the statute. If Congress had wanted those restrictions to be in place, it would’ve been in the statute,” he said, according to the report.

The 50 second spot from the PA Democratic Party doesn’t include a voiceover, but instead images of fake handwritten letters intended for Toomey from CEOs of Cruise Lines, Airlines, and Oil Companies.

The spot ends with a signed letter to Toomey saying, “Thanks for nothing,” signed by “the people of Pennsylvania.”

A spokesperson from Toomey’s office fired back on the claims made in the ad and cited several stories about the negotiations that went on for business loans.

“Senator Toomey appreciates that nearly every member of Congress voted for the CARES Act, a bill he helped write,” said Steve Kelly, a spokesperson for Toomey. “This includes Pennsylvania’s entire Democratic congressional delegation.”

Kelly also said that the Congressional Oversight Commission does not have purview over the small business loan program and linked to an article from The Hill. He also pointed to a Washington Post story to fight back on the airline CEO letter portrayed in the ad with Toomey saying that the airline provision funds “didn’t end up in the place I thought was ideal,” but he added that the overall assistance to businesses “will do a tremendous amount of good.”

A statement from the PA Democratic Party claimed that Toomey’s statements indicate that he is only looking out for the “millionaires and billionaires” and working for the “rich and powerful.”

“Pat Toomey won’t let a public health crisis stop him from helping to make the rich richer,” said Beth Melena, senior communications advisor for the Pennsylvania Democratic Party in a release about the ad. “Instead of using his position on the COVID-19 Congressional Oversight Panel to help struggling small business owners, Pat Toomey is letting millionaires get away with using taxpayer funded bailout funds to write themselves big checks.”

Although Toomey is often the center of criticism from the Pennsylvania Democratic Party, this appears to be its first public hit against Toomey since he released his reopen PA plan, which continued to fuel the fire of rumors about his interest in running for governor in 2022 when Gov. Tom Wolf finishes his second term.