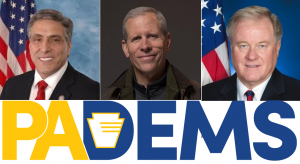 Since the terrorist attack in Charlottesville, the Pa. Democratic Party has worked to put statewide Republican hopefuls on the record against white supremacy. After gubernatorial candidates Paul Mango and Pa. Senator Scott Wagner did so, the party asked them to denounce President Trump.

Republicans are pushing back, accusing Democrats of politicizing the tragedy and moving the goalposts.

It started on Monday night, when the Democratic Party of York County criticized Wagner for his silence following the attacks. He hadn’t said or posted anything publicly about the attacks up to that point. The York Dispatch took notice of the charge and published an article on Tuesday afternoon. “Reached by phone Tuesday, Aug. 15, Wagner told The York Dispatch he believes in fairness and said  there’s no room hatred of any kind in our society,” the Dispatch reported.

On Wednesday morning and again Wednesday afternoon, the Pa. Democratic Party accused Wagner of silence on the attacks – citing the Dispatch article.

Wagner told PoliticsPA that he was direct in his condemnation of the events.

“I was very clear in my comments to the York Dispatch that I condemn racism in all forms and I believe in fairness for everyone. My record as a business owner and legislator support that,” Wagner said in an email.

An hour after the second Wagner release, the Pa. Dems criticized Barletta in similar fashion.

Barletta had generically condemned the violence in Charlottesville in a Facebook post on Saturday. Two hours after the Dems’ press release, he directly criticized the white supremacists responsible. “Let me be clear: Groups fueled to violence by a false and repugnant sense of racial supremacy have no place in American society. This includes white supremacists, neo-Nazis, antifascists, and other groups on the fringes of our politics that are motivated by intolerance and hate,” he wrote.

“Bob Casey is off to a terrible start. Lou Barletta is not even a candidate for Senate, and Bob Casey’s liberal operatives have already failed twice by lying in desperate attempts to score political points. Bob Casey is 0 for 2, just like his two terms serving in the Senate. Bob Casey lacks any accomplishments to run on, which is why he continues to be afraid of Lou Barletta,” Anzur said.

Mango issued a statement on Sunday specifically denouncing white supremacists. “White Supremacy and bigotry have no place in America and I strongly condemn it and the hateful and evil actions of those in Charlottesville,” he wrote.

But on Thursday morning, the Pa. Dems challenged Mango and Wagner again – this time to denounce President Trump over his widely criticized “both sides” remarks. All of the party’s releases were issued after the President’s Tuesday press conference and resulting backlash.

“The Democrats are simply trying to exploit the events in Charlottesville for political gain. It’s shameful, and everyone involved should be embarrassed,” Wagner said.

Senate hopeful Jeff Bartos commented on Sunday. “We are horrified by the violence and hatred we saw on television, and we are angry that Nazis, the KKK and white supremacists have marred a town and a University we love by their unconscionable acts of murder, hatred and bigotry,” he said.

State Reps. Jim Christiana and Rick Saccone, each running for U.S. Senate, have not issued a statement about the Charlottesville attack.

U.S. Senate hopeful Paul Addis has been the most blunt of all GOP candidates. He criticized white supremacists on Saturday and lambasted President Trump on Tuesday.

“President Trump’s statement today equating the Neo Nazis, Ku Klux Klanners and White Supremacists in Charlottesville with the counter demonstrators is an affront to all Americans,” Addis wrote. “Our political leaders must speak with one voice to denounce such evil. I am ashamed of President Trump’s comments at his press conference today at Trump Tower. I believe all Republicans must speak out forcefully to condemn racism and hatred in America.”