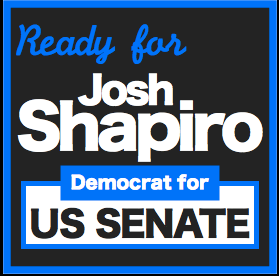 A growing group of Pennsylvania Democrats are and one of them created a Facebook page to advocate for the Montgomery County Commissioner to jump into the 2016 Senate race.

The page “Ready for Josh Shapiro” was launched yesterday. One of its first posts referred to our reader poll showing Shapiro leading a prospective field of candidates.

“We are grassroots supporters who want to elect Josh Shapiro as the next United States Senator from Pennsylvania!!,” explains their Facebook description.

While the page is young, it has already attracted over 150 likes, including some prominent local Democrats.

We spoke to the creator of the group, a 28-year old from South Central PA named John.

“Ready for Josh Shapiro is not about me, an organization or an agenda,” he told PoliticsPA. “I created this grassroots movement with a little graphic design skill and a laptop with the simple purpose of encouraging Josh Shapiro to run for the US Senate in 2016 and in doing so create a platform to organize a 100% grassroots support base and share positive ideas for the future. This is about people driving the conversation, not party bosses, not ‘inevitable candidates’, not special interests.”

“I’m supporting Josh because I believe he is an exceptional candidate at an extraordinary time,” John continued. “He is, in my view, the candidate to defeat Pat Toomey and in doing so help elect a Democratic majority in 2016.”

“Josh is a breath of fresh air. He has the ability to motivate our base and especially younger voters like never before,” he concluded. “Josh’s resume is above and beyond anything you could dream of for a Democratic candidate. His record is a winning one. Like many young people today, Josh is pragmatic. He’s a proven bipartisan leader who gets stuff done!”

John also noted that the group is not affiliated with Shapiro in any way and that he hasn’t even spoken with anyone on Shapiro’s staff. He’s just hoping to lay a grassroots foundation should Shapiro chose to run.