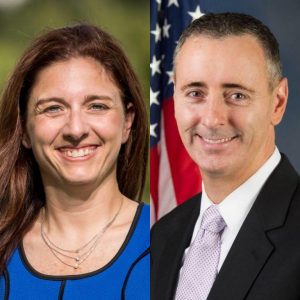 Rep. Brian Fitzpatrick (R-Bucks) and Democratic challenger Christina Finello, an Ivyland Borough Councilwoman, will face off in multiple debate in the fall for this closely watched congressional race in the Philadelphia suburbs. Both campaigns have agreed to debate appearances, although the specifics are still being ironed out.

According to a release from the Fitzpatrick campaign, the incumbent GOP Congressman confirmed his attendance for two congressional debates, the first in August at WCBC Radio and the second on October 6 at the Lower Bucks campus for Bucks County Community College. The Fitzpatrick campaign added that they will also be participating in a third debate in October at Delaware Valley University, although the details have not been finalized for it yet.

The Finello campaign confirmed to PoliticsPA their participation for the October debate at BCCC’s Lower Bucks campus and said that they are working out details and scheduling for the debate hosted by WBCB Radio. Finello’s campaign added that they’ve been in touch with the League of Women Voters about their plans to host a debate with the Bucks County Chamber of Commerce.

Finello went head to head with Skylar Hurwitz in a debate during the Democratic primary. She cruised to the nomination after besting Hurwitz by 55 points in the June primary.

Fitzpatrick, who defeated pro-Trump Republican Andrew Meehan in the 2020 GOP primary by 27 points, did not debate Meehan leading up to the June 2 primary. According to Levittownnow.com, Meehan criticized Fitzpatrick for refusing to debate him, claiming that the GOP congressman was a “fake” and “frightened.” Fitzpatrick defended his decision to bypass the debate by citing the joint decision from the Bucks and Montgomery County Republican Party’s to denounce Meehan over a set of “controversial comments” and “alleged wrongdoing.”