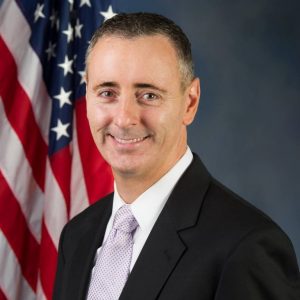 Rep. Brian Fitzpatrick (R-Bucks) will continue to represent the Republican Party in November after fending off a challenge from Andrew Meehan, a pro-Trump Republican and financial advisor, in the GOP primary for the 1st Congressional District. The AP called the race at 10:16 a.m. on Wednesday morning, while Fitzpatrick holds a 13 point lead over Meehan among in-person votes. Bucks County has until next Monday to collect outstanding mail ballots.

NRCC Chairman Tom Emmer lauded Fitzpatrick’s victory in a statement describing the incumbent as a “bipartisan problem solver,” and claimed that Democratic nominee, Christina Finello, an Ivyland Borough Councilwoman, has a “minimal chance at victory.”

This is not the first time Fitzpatrick has faced opposition within his own party from a candidate who attempted to claim the “Trump” lane in the race. In 2018, Fitzpatrick bested Veteran and former Bucks County Assistant District Attorney Dean Malik, who ran a pro-Trump campaign in the GOP primary by 34 points, before going on to edge out a narrow victory over Democrat Scott Wallace in November.

Fitzpatrick often attempts to distance himself from President Donald Trump in a district that supported Sec. Hillary Clinton by a few points in 2016. While Fitzpatrick was recently rated as the most bipartisan member of Congress in 2019, according to the Bipartisan Index from the Lugar Center and the McCourt School of Public Policy at Georgetown University, he has somewhat welcomed some mainstream GOP talking points into his campaign by blaming China for the coronavirus pandemic in a new ad, while not detailing the Trump administration’s response to the virus.

While Fitzpatrick’s race was closer than expected, Finello cruised in the Democratic primary against Skylar Hurwitz, a technology entrepreneur and small business owner.

3 thoughts on “PA1: Fitzpatrick Fends Off Meehan in GOP Primary”