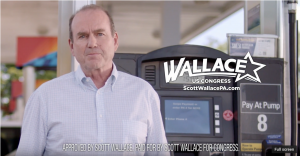 From the gas station to the television.

Wallace, standing at a gas station, ties his opponent to big oil corporations and the GOP tax bill.

“Brian Fitzpatrick voted for the new tax law that gives most of the money to big corporations and the top 1%,” Wallace says in the 30 second ad. “Exxon alone, got a $6 billion tax break. How’s that working out for you here at the pump?”

The Fitzpatrick campaign fired back by claiming Wallace was a liar and referenced a back and forth between the Democratic candidate and Rachel Reddick, during the Democratic Primary.

“Scott Wallace’s entire campaign is based on a lie, and this is the same nonsense he pulled in the Democrat Primary election against Rachel Reddick,” said Genevieve Malandra, Spokeswoman for Team Fitzpatrick. “Scott Wallace refuses to acknowledge the fact that Congressman Fitzpatrick is ranked the #1 Most Independent Freshman Congressman in the Nation, with the highest environmental score in his conference by a mile.”

The Fitzpatrick campaign continued to critique Wallace’s financial status as a divide between the two candidates.

“Apparently he likes to attack those who have served our nation to keep him and his family safe, so that he could peacefully live the life of an inherited corporate multi-millionaire,” Malandra said. “This man is downright shameful.”

In a statement relating to his first ad, Wallace boasted about not taking money from corporate PACs while attacking painting Fitzpatrick as beholden to “Washington special interests.”

“He took hundreds of thousands of dollars from the oil and gas industry and then voted to give them billions of dollars in tax breaks. I don’t see that lowering gas prices for the working families in PA-01,” Wallace said in the statement. “I’m not taking a dime in Corporate PAC or lobbyist money and will support middle-class tax breaks that benefit everybody, not just top 1 percent.”

This morning, the Congressional Leaders Fund, a GOP super PAC endorsed by House Republican leadership, released its first ad in the race for this seat attacking Wallace on being hit with a $70,000 tax lien. The Wallace campaign responded to this ad by stating it was “one clerical mistake” and that the Democratic candidate has “paid all his taxes in full, period.”

The story was updated with a comment from the Fitzpatrick campaign.