Pennsylvania’s Elected Officials React to the State of the Union 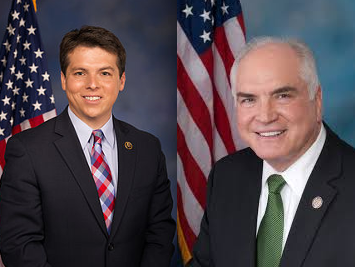 Republicans have mainly been showing their support for Trump and touting his speech.  Democrats have been saying that Trump’s speech was out of touch.

PoliticsPA is the awarding the ‘party warrior award’ to Democratic Rep. Brendan Boyle for strongly coming out against Trump’s speech and actions in the White House, and Republican Rep. Mike Kelly for his praise of Trump’s speech.

Below are the highlights from each statement that was released. PoliticsPA will update with additional statements as we receive them.

“Donald Trump’s presidency has been a series of broken promises to the middle class and workers, a fact which tonight’s address did not change.  This Administration talks about helping workers and middle class families, but when it comes to actions, it’s all extreme right economics and decimating health care. After passing into law massive tax giveaways to the wealthiest and biggest corporations, Republicans in Congress now want to tackle “entitlement reform,” which is nothing more than the clever phrasing of a scheme to cut Social Security, Medicaid and Medicaid.”

“Already, about three million Americans have received bonuses and raises due to tax reform—and this is all before the benefits of new investments are realized. I share the President’s view that tax reform will help to grow wages, create new jobs, and spur stronger economic growth. I was also pleased that President Trump laid out a clearer vision on three very important issues: infrastructure, immigration, and national security. I was heartened to hear him say we must streamline the approval process for new road and bridge projects, and I look forward to reviewing in detail proposed infrastructure legislation. President Trump also outlined a legal solution for DACA recipients, which goes beyond what President Obama had proposed, with an offer of a path to citizenship. We need stronger border security that enhances physical barriers, increases law enforcement patrols, and utilizes surveillance-based technological advancements.”

“President Trump’s vision for the year to come, and beyond, is ambitious, essential, and fully achievable. His words tonight were a challenge to every member of Congress to put the strength, safety, and economic security of our country and its citizens before petty political differences. It’s a challenge I intend to meet head-on. I particularly look forward to playing a pivotal role in devising and delivering, in the president’s words, ‘the safe, fast, reliable, and modern infrastructure our economy needs and our people deserve.’”

“The President outlined some the major accomplishments of his first year in office. We saw comprehensive Tax Reform become law, and already see the benefits in terms of bonuses and wage increases for millions Nationwide. We saw the repeal of the Affordable Care Act’s Individual Mandate, which required everyone to buy health insurance or pay a fine. We’re seeing the decimation of ISIS overseas. We saw a huge rollback of federal regulations that directly resulted in a surging economy. While these are all great advancements, there’s still much to do. I’m looking forward to working with the President to secure our borders, deliver on immigration reform and, hopefully, a transportation and infrastructure package to further restore our Nation’s ability to compete globally. I’m hopeful about making strides for real progress in the coming year.”

“Tonight, President Trump issued a bold and forward-looking State of the Union address. Thanks to the Tax Cuts and Jobs Act, this country has just unleashed a new era of economic growth and Americans from all walks of life are beginning to reap the benefits – recognizing lower taxes, more money in their paychecks, and greater potential for domestic businesses investment.”

“What is needed now more than ever is for our nation to come together, both Democrat and Republican, to tackle serious challenges facing our nation.  What’s more, is that we do so in a civil, dignified manner that is becoming of American values, viewing those with different viewpoints as a strength to be harnessed, not a quality to be criticized.  It is my hope that the President will embrace the bipartisan Problem Solver’s Caucus in 2018 as the vehicle for solutions that will unite our great nation.   Each one of us look forward to working with the Administration on a wide range of issues, from tackling the opioid epidemic, to growing our economy, to fixing an inherently broken system in Washington, DC.  Let’s get to work.”

“Last night, I was proud to attend President Trump’s first State of the Union address as he laid out his triumphs in his first year in office and his vision of a successful and strong America.  The economy is taking off and reaching new heights. Deregulation and cutting of red tape has increased productivity. The Tax Cuts and Jobs Act signed into law last year has led to millions of Americans receiving bonuses and seeing higher wages. Americans from every background and socioeconomic class are seeing expanded opportunities and greater success. I look forward to working with the Trump Administration to implement many of the priorities he discussed tonight. Repairing our crumbling infrastructure, ensuring that we can remain competitive in the 21st Century and creating jobs for millions of Americans.  Reforming our broken immigration laws so that we know who is entering our country and making sure it is in the best interest of our citizens. Maintaining the most powerful and greatest force for good in the world, our armed services, and the amazing men and women who serve our country.”

“A year ago, President Trump took the helm of a country looking for direction.  Divided for years by politicians pitting Americans against Americans, the old system of Washington first policies put wealth and opportunity out of reach for every day Americans.  The American people for too long have been led by politicians who hold special interest over national interest. After President Trump’s first year in office, the unique optimism of the American people has returned, and returned at historic highs.  The Dow’s 31 percent gain during his first year in office has been the fastest growth since FDR, adding trillions in value for the pensions and retirement accounts of regular Americans.  Companies are again investing in American workers and American capital.  The economy has been primed for success by a president who is working first and foremost for the American people.”

“It was great to hear President Trump’s State of the Union Address tonight, and the progress we have made over the last year. Americans are seeing an economy that is roaring back to life with almost daily announcements from companies about major investments that they are making in their people, in their businesses, and in the economy. Economic growth is particularly important because when the economy is healthy, and thriving, it will bring in the revenues needed to fund critical programs laid out by the President – including the nation’s infrastructure, military, and opioid treatment, prevention and law enforcement programs.”

“During tonight’s State of the Union Address, the President laid out a vision of our country that was detached from the reality of his administration. Since taking office just over one year ago, President Trump has offended allies, defended adversaries, pushed reckless policies, divided Americans, and picked useless Twitter fights. Although the President would prefer that we judge this year on the basis of the rehearsed remarks he just delivered, his first year in office has been filled with broken promises, damaging bluster, and willful attacks on our democratic institutions.”

“President Trump delivered a hopeful, confident message to the American people. The optimism expressed tonight is reflective of the feedback I get from constituents all across the district – and with good reason. Over the last year, Congress and the White House have worked together to deliver greater economic opportunity for everyone. We’re transforming our economy from stagnant to prosperous, and the results speak for themselves. Millions of Americans are already receiving bonuses and wage increases as a result of our unified effort to deliver middle-class tax relief and to unleash American innovation.”