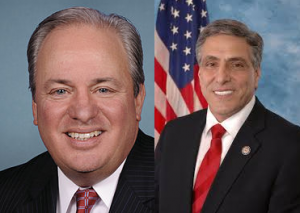 Yesterday afternoon, President Donald Trump announced he is withdrawing from the Paris Climate Agreement, and Pennsylvania’s elected officials started giving their perspective on the move.

Pennsylvania Democrats were united in their opposition to the decision, while the Republicans were split with most agreeing with the decision but the ones from the southeast voicing slight dissent.

PoliticsPA is giving the ‘party warrior award’ to Rep. Lou Barletta (R-Luzerne) and Rep. Mike Doyle (D-Allegheny) for most strongly articulating the party line.  Barletta voiced unwavering support for the decision, while Doyle argued that the decision gives up the U.S.’s leadership position.

The ‘temperance award’ to Rep. Pat Meehan (R-Delaware) and Rep. Dwight Evans (D-Philadelphia).  Meehan blasted the decision and argued that the best course was to work to fix problems with the agreement, while Evans vowed to continue to work for the goals of the agreement even with the decision.

Below are the highlights from each statement that was released from elected officials.  PoliticsPA will update with additional statements as we receive them.

“I urge President Trump not to abdicate the United States’ global leadership and seat at the table on climate change – a pressing issue for Pennsylvania’s economy, especially energy, agriculture and tourism, and our resident’s health. Pennsylvania is an energy leader and addressing emissions presents opportunities for Pennsylvania’s natural gas, renewable energy and energy efficiency industries to grow and create new jobs.”

“Additionally, pulling out of this climate change agreement will undermine the clean air that every Pennsylvanian has a right to expect. Vulnerable children will be particularly impacted by the lack of action to protect clean air. Without action on climate change, more children will suffer from diseases like asthma and malnutrition. Climate change is a serious challenge which requires action, not retreat.”

“The announcement today By President Trump is short-sighted and a giant step backwards as he has now linked arms with Syria and Nicaragua and ignored the more than 190 nations who are part of the Paris accord. He has also ignored the views of the Pentagon who see climate change as a major national security issue.”

“Nevertheless, President Trump’s action to withdraw the US from the Paris Climate Agreement, does not mean that my colleagues and I will advocate less for what is in the best interest of the Philadelphians, Pennsylvanians and the American people. On the contrary, today’s decision calls on the resistance to speak out. I will continue to be your voice & speak up in Congress on climate issues.”

“Today’s announcement is great news for the American people. It is a victory for our economy, our sovereignty, and our Constitution. The Paris Agreement – which should have been considered a treaty from the very beginning – was written with Americans and their elected representatives as an afterthought. It would result in unfair domestic harm for American workers, taxpayers, consumers, manufacturers, and energy producers. We would shoulder most of the cost and gain no measurable reward.”

“I’ve advocated for removing government barriers to the development of hydropower, which would create thousands of American jobs and provide power to millions of Americans at low cost. But decisions can’t be made unilaterally. Our removal from the Paris Climate Agreement is a solid first step to reasserting the role of the U.S. Constitution in international affairs and domestic policies.”

“I am disappointed by the Administration’s decision to withdraw from the Paris Agreement. This decision is a setback to sustainable energy innovation across our country and forfeits an opportunity for the United States to lead on an issue of economic and environmental significance. While the Paris Agreement has its flaws, the solution should not be to pack up, walk away, and surrender our position of influence.”

“The Paris Agreement isn’t perfect. But by abandoning it, America is relinquishing that seat at the table. It calls into question our commitment to protecting and preserving the environment. And it forfeits our ability to drive countries like China and India to reduce their carbon footprint and compete on a level playing field. Ultimately, this disappointing decision diminishes America’s leadership role on the world stage.”

“I urge the Administration to keep the United States in the Paris Climate Agreement. Last month, I joined members of both parties in urging the President to remain in the agreement and to keep our seat at the table, and our words are worth repeating: ‘The world’s leading nations must work together… It is imperative that we maintain our seat at the table in global discussions of how to address the threats posed by climate change.’ I share Secretary of Defense Mattis’ view that this challenge must be addressed proactively and head-on, and I agree with both our Secretary of State and Secretary of Energy that retaining our seat at this table is vitally important. A renegotiation is a better option and will benefit our nation in the long run.”

“The Paris Accord, which President Obama signed without the consent of the American people’s elected representatives in Congress, would have been disastrous for American workers, energy consumers, and our economy. I commend President Trump for withdrawing from this terrible deal and announcing his willingness to re-negotiate a better agreement that responsibly balances protecting our environment and family-sustaining jobs.”

“Ending antigrowth obstacles like the Paris Agreement opens the way to a brighter future, with America in the lead.  In applauding President Trump’s move today, I stand with Western Pennsylvania manufacturers, boilermakers, power plant workers, railroad workers, truckers and miners in opposition to the Washington and global elites who want to concentrate power in their own hands.”

“All Americans should be deeply concerned by the President’s retreat from American leadership and ideals on the global stage, from climate change to human rights. This combined with the President’s failure to fully support NATO, signals to the world that under his leadership our country is in a state of withdrawal.  The United States, the leader in reaching the 2015 agreement, is the second highest emitter of greenhouse gases.  Previously, only Syria and Nicaragua declined to join the agreement.  I cannot believe that President Trump would choose to join these ranks with this historic mistake.  Rather than ‘negotiating better deals’, the President is removing us from the bargaining table altogether.”

“Today’s reversal on the Paris Agreement is foolhardy and incredibly disappointing. President Trump clearly doesn’t understand the Paris treaty – and he certainly doesn’t understand my district. By withdrawing from this non-binding agreement, we’re giving up our leadership on the issue and we won’t even have a seat at the table. I will continue to fight for policies that address climate change by creating good jobs for Pittsburghers.”

“President Trump has chosen to go against world opinion as well as American business opinion. With this as well as with many other international issues, America should be leading. I am sorry that isn’t happening right now. My hope is that President Trump will reconsider his ill-advised choice.”