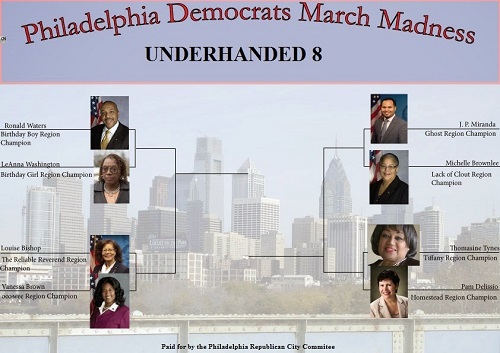 As March Madness whittles down to the final four teams, the Philadelphia Republican Party took advantage of the excitement and drew up a bracket of their own. This one, however, has a political angle.

Entitled “The Underhanded 8,” the Philadelphia GOP took the recent blunders that their Democratic counterparts have committed in the month of March and positioned them in an Elite Eight-style bracket.

“Usually the month of March comes in like a lion and out like a lamb; however in Philadelphia, the lion continues to roar,” said Joe DeFelice, the Philadelphia Republican Party Executive Director.

“Right before the month started, State Rep JP Miranda was indicted for having a ghost employee on his payroll and ethical issues continue to abound for Philadelphia Democrats as recently as this last week when it was reported that State Rep. Pam DeLissio claimed a homestead exemption in Harrisburg as her primary residence while also registering her car there for insurance reasons. The blatant disregard these individuals have for their voters is ridiculous. We have had our own version of March Madness and thereby we introduce the ‘Underhanded 8.’”

The bracket also features all those allegedly implicated in the bribery sting operation that Attorney General Kathleen Kane called off in 2013. State Rep. Ronald G. Waters is the Birthday Boy Region Champion and State Rep. Vanessa Brown is the the Ooowee Region Champion — both named for the apparent quotes that the undercover operative was able to compile during the bribe handoffs.

President Judge of Philadelphia Traffic Court Thomasine Tynes is the Tiffany Region Champion in honor of the Tiffany bracelet she admitted to receiving as a bribe.

Finally, State Sen. LeAnna Washington is the Birthday Girl Region Champion for the criminal charges that have been leveled against her in regards to her use of political staffers for campaign purposes — the most notable accusation being a birthday fundraiser she held for herself.

The bracket, “which highlights the shortcomings and underhanded acts of eight Philadelphia Democrat Politicians,” encapsulates a bad month for the Democratic Party in the city and taught us that the Philly GOP actually has a sense of humor.