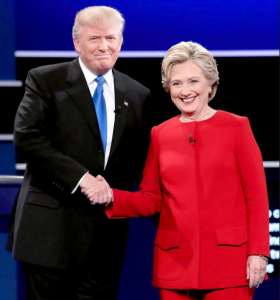 The latest Public Policy Polling survey shows Clinton with 49% while Donald Trump is at 44%.

The previous two PPP polls also had Clinton up by five points.

The numbers may not have moved but that doesn’t mean respondents didn’t have a clear opinion of who won the first general election debate.

Additionally while Clinton’s favorable/unfavorable numbers are still underwater, 42% to 51%, they are still better than Trump’s, 38% to 55%.

Finally, respondents were asked about the candidate’s preparedness for the office. A majority believe Clinton is prepared for the presidency (52/43), has the right temperament (51/41), and can be trusted with nuclear weapons (52/41). Meanwhile, a majority think Trump isn’t prepared (37/56), doesn’t have the right temperament (38/56) and can’t be trusted with nuclear weapons (40/54).

PPP even asked which candidate was more likely to cause a nuclear war, which Trump won by a 50% to 29%.