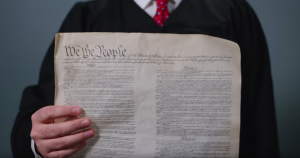 PFAW’s ad is running in Pennsylvania and 11 other states.  The ad begins with a man who you only see from the neck down in judge’s robes ripping up a copy of the Constitution.  It flips back and forth between the person continuing to rip the Constitution and slides detailing their issues with Gorsuch.  The ad runs through a list of reasons why the group opposes Gorsuch, which they expand on in a PDF it also released.

You can view the ad below:

Pennsylvania’s senior Senator Bob Casey’s stance is a cautious one.

“I will thoroughly review Judge Gorsuch’s record, particularly his appellate decisions and his answers to questions during the hearing and those submitted in writing afterward,” Casey said.