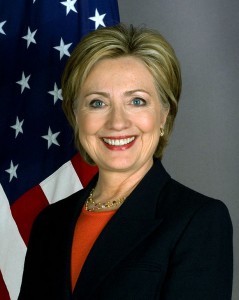 At least that how it looks, according to a new Quinnipiac poll.

The poll tested Clinton against a number of potential GOP 2016 presidential nominees in the historic swing states of Florida, Ohio and Pennsylvania.

Hillary performed strongest in the Keystone State, besting every challenger by double digits and posting a 55/38 favorable/unfavorable rating.

Her strength lies in her support among female and independent voters, as she leads each candidate by wide margins for each group. Clinton also beat every competitor among male voters, except for Christie who prevailed 45/42.

One interesting note is that Rick Santorum’s favorability numbers are underwater in his own state. The former Senator received a 33% favorability against a 42% unfavorability rating. 24% said they hadn’t heard enough.

“New Jersey Gov. Christopher Christie fares better than other potential GOP candidates against Hillary Clinton in Pennsylvania, but despite his ‘neighbor’ status he is nowhere close to challenging a candidate who is riding a tsunami of support from women,” said Tim Malloy, assistant director of the Quinnipiac University Poll.

“While would-be Republican presidential candidates, even Native Son Rick Santorum, absorb less than stellar favorability numbers, Clinton has the closest thing to rock star ratings a politician can get in America today,” Malloy concluded. “Pennsylvania, which just elected a Democratic governor, is shaping up early in the campaign season as the bluest of the Swing States.”

The Quinnipiac survey was conducted from January 22nd to February 1st. 881 registered voters were interviewed live through land lines and cell phones. The margin of error is plus or minus 3.3%