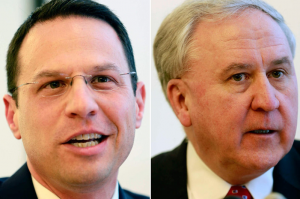 One of our goals this year is to do periodic updates on statewide election contests.

The Attorney General battle has been one of those races.

In June, Rafferty emerged victorious 55% to 44% in our most popular survey ever.

Then in August, the Republican nominee won again by a 60% to 40% margin.

So will Rafferty pull off the three-peat or will Josh Shapiro finally get the win?

If the Election Were Today, Who Would You Vote For in the Attorney General Contest?