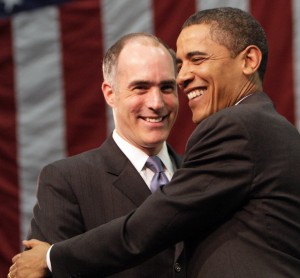 The Obama Administration moved one step closer to ensuring the Iranian nuclear deal stays in effect.

According to Jonathan Tamari of the Inquirer, Senator Bob Casey will be voting in favor of the deal.

“This agreement will substantially constrain the Iranian nuclear program for its duration, and compared with all realistic alternatives, it is the best option available to us at this time,” Casey wrote in a 17-page, more than 8,000 word analysis he shared with the Inquirer.

The state’s senior Senator called it “one of the most difficult decisions of my public career.”

Casey was one of the few Democratic holdouts remaining and is now the 32nd Senator to voice support for the Iranian deal (Chris Coons of Delaware has since become the 33rd).

The Republicans in Congress are seeking to defeat the deal through legislation. It is expected that since they have the majority in both chambers, that bill will pass and the President will naturally veto it. Therefore, 34 Senators would prevent the necessary two-thirds majority needed for a veto override.

The White House has given recent indications, however, that they would like to reach 41 votes in the Senate so that they can filibuster the motion and stop it there.

There are currently 46 Democrats in the Senate. So far only two have announced their opposition, Chuck Schumer of New York and Bob Menendez of New Jersey.

Recently, President Obama conducted an interview with Philadelphia’s 6abc, in an attempt to convince Pennsylvanians and Sen. Casey to support the deal.

“At some point it has to be a vote, I think, of conscience,” Casey told Tamari, adding “and I have many very good friends who will disagree with the decision, I’m certain of that.”

You can read Sen. Casey’s full dissertation on the Iranian nuclear deal here.

UPDATE: Barbara Mikulski of Maryland has since stated she will support the deal, meaning it has enough support to avoid a veto override.