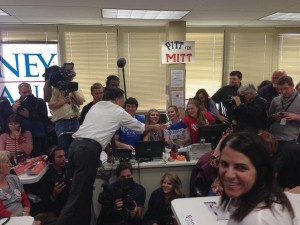 Check here to find the latest on the Presidential, U.S. Senate and Row Office races across Pa. We’ll have updates all day Tuesday, and returns Tuesday evening.

10:54 pm: The Associated Press has called the race for Auditor General for Democrat Eugene DePasquale.

10:41 pm: The Associated Press has called the races for Attorney General and Treasurer for Democrats Kathleen Kane and Rob McCord.

7:56 pm: From Daniel Cook, Campaign manager to Sen Dave Argall (R-Schuylkill): “Turnout has been solid throughout the district and has been consistent with the initial morning numbers .  Our volunteers are still making last minute phone calls to those voters who haven’t reached the polls yet. Voters have responded to our message the entire campaign in a positive manor and its clearly showing with the enthusiasm we are hearing from Pine Grove to the Poconos.”

4:52pm: Election admin problems in Philly. Reports the City Paper: The names of registered Philadelphia voters are not showing up on voter rolls and poll workers are instructing them to vote using provisional ballots, according to voters and poll workers in West and North Philadelphia. Provisional ballots,if they are counted, are not counted until up to seven days after the election.

“When we saw what was going on in Pennsylvania, we thought here is a real opening in a pretty big state that favors Governor Romney. That’s why we saw them in the Philadelphia collar counties the other night and in Pittsburgh today. So we feel very, very good about Pennsylvania. I think he’s going to win Pennsylvania tonight.”

3:50pm: Romney is on the ground in Pa., greeting GOP volunteers in Green Tree. There’s not currently any media event planned. Here’s a photo from Romney’s campaign.

1:50 p.m.: Former Gov. Tom Ridge told Fox News that the GOP thinks PA turnout may sway in their favor. He said voters in “the collar counties in Philadelphia” as well as those in Bucks and Montco will decide against the President, who Ridge said has been divisive and promoted class warfare.

“A lot of them have sons and daughters that graduated from college who can’t find a job. So you pull these things together and there is an intensity and an excitement as evidenced by the 30,000 people in 45-degree weather on Sunday night we haven’t seen in Pennsylvania in a long, long time.”

12:40 p.m.: A door hanger seemingly paid for by the PA Dems has been sending York voters to the wrong polling place. The door hanger included a photo of the President and Sen. Casey, and was distributed in what is considered to be a Dem stronghold. The Patriot-News reported that if the mixup “deters a significant number of people from voting, it could affect a potentially close presidential race…as well as the 4th Congressional where Democrat Harry Perkinson needs a strong showing in York to compete with Republican Scott Perry. State Rep. Eugene DePasquale, whose district includes York, would also like a strong turnout to boost his run for Auditor General.”

12:27 p.m.: A PA election judge has ordered an Obama mural in a Philadelphia polling place to be covered up.

Noon: A GOP operative working around several congressional and state legislative races says turnout is high everywhere: the suburbs, in the city and in rural areas.

“Looking more like ’08 than ’04 at this point.  We are doing the traditional strike-and-drag program as well as some targeted door knocking.”

11:28 a.m.: A clarification of the BPP allegation – this photo was taken by the PAGOP at 1221 Fairmount Ave in Philly. Fox News also recorded their own footage and broadcast it.

11 a.m.: PA GOP spokesperson Valerie Caras tweeted this morning about a mural of President Obama painted on the wall of a Philadelphia polling place. “Talk about #demshenanigans,” she wrote. The party has been scouring Philly for signs of impropriety. 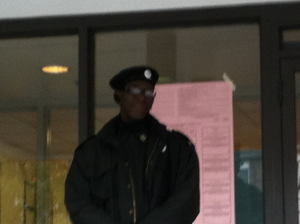 10:18 a.m.: Chatted with team Casey and they’re feeling good. Strong turnout reported in NEPA so far, plus good weather there as everywhere.

So far this morning, Democratic operatives prohibited 75 legally credentialed Republican election workers from accessing polling places in heavily Democratic areas in Philadelphia. Incidents ranged from judges of elections refusing to seat Republican Minority Inspectors and Clerks, to reports of Democratic election operatives announcing that “No Republicans will be allowed in the polling place.”

9:50 a.m.: The AFL-CIO is expecting “well over 3,500 volunteers staging from three dozen locations across the state,” said a spokesman.

9:41 a.m.: Said one Dem insider in Montgomery County: “Turnout started off slow in SEPA but then increased a lot…some of the precincts in my district are already between 25%-35% turnout.”

9:30 a.m.: From Tom Smith CM Jim Conroy: ““Thousands of volunteers across the commonwealth have been knocking doors and making calls for months, and their effort peaks today.”

9:20 a.m.: From all over the state – the North Hills and Butler County in the west, to Luzerne County and Bucks in the east – we’re hearing reports of heavy early turnout.