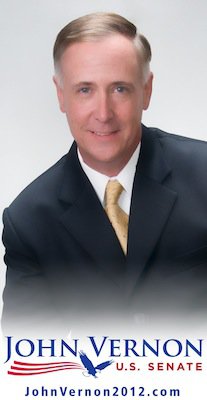 Colonel John Vernon may be a new face on the political scene, but the results of an internal poll released today by his campaign show he has a profile that resonates with the GOP base.

National Research Inc., a Republican polling firm whose clients include New Jersey Governor Chris Christie, conducted a statewide poll for the Vernon for Senate 2012 Campaign Committee.  The telephone survey was taken on September 19-20 and had a sampling of 500 likely PA voters.  The full memo is below.

The results indicated that Democratic Senator Bob Casey is showing early signs of vulnerability.  Casey’s favorability rating is 47 percent, his job approval rating is 46 percent, and his ballot score against a generic Republican is 46 percent – figures that are roughly in line with independent polling this year.

Among Independent voters, Casey’s job approval rating is 41 percent and he earns 45 percent against a generic Republican.

Vernon came out in front with 29 percent of the vote. Steve Welch was second with 15 percent, followed by Laureen Cummings at 13 percent. David Christian and Tom Smith each garnered 6 percent of the vote Marc Scaringi at 5 percent. 24 percent were undecided.

Granted it’s an internal campaign polling memo, which are most often released to the public by campaigns seeking to demonstrate viability. Additionally, public memos typically contain only the positive highlights of polling.

Nonetheless, Vernon’s effort to poll the state so early is the sign of a serious campaign.

National Research Inc., argues that based on the results of their recent poll John Vernon is one of the few candidates who can win in a presidential year for the following reasons:

“He unites the establishment and Tea party wings.  He has the right messages and the right background. He is popular with base Republicans, but also with Independent voters.  He is an outsider and a fresh face when that is exactly what voters want.  Besides his fiscal positions, he has an experience in military and foreign affairs unmatched by any of the other candidates.”

Vernon’s campaign is very encouraged by the results of this recent poll.

“When people hear John Vernon and see him and meet him, they see him as someone that’s a real conservative and has the experience to be their Senator,” said Robb Austin, Vernon’s Communication Director.

Austin emphasize that Vernon is truly an “active candidate.”

“He is on the road every week meeting voters in different parts of the state and he is learning a great deal about what’s on the minds of the people of the commonwealth,” Austin said.  “He connects extremely well with voters.  Our goal is to get as well known as possible and reach out to voters and get known as much as we can.”

Here is the complete memo: