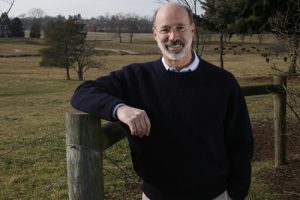 Governor Tom Wolf will be the Keynote speaker at the Pennsylvania Democratic Party’s Winter Dinner this Friday.  Wolf’s speech will come three days after he delivers his budget address, and as he starts his reelection efforts.

Wolf is heading into the 2018 election cycle with the chance to talk to key Democratic activists and Party members all gathered in one place.

“Governor Wolf will talk about the different approach he has taken to Harrisburg to prioritize Pennsylvania families by protecting education and seniors and fighting the opioid and heroin crisis,” Wolf campaign spokesman Jeffrey Sheridan said in an email.

Pennsylvania Democrats face historic minorities in both legislative chambers, meaning it will be crucial to keep the governor’s mansion. Not to mention, whoever wins the governor’s race in 2018 will hold a veto pen for congressional redistricting in 2021.

With a primary challenger possible but unlikely, Wolf will be looking to motivate activists to begin building the grassroots network that propelled him to victory in 2014.