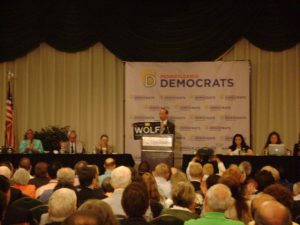 Jim Burn continues to be a thorn in Governor Wolf’s side.

When Wolf won the Democratic primary two years ago, he sought to appoint his own party chief. Burn refused to step aside and Wolf set up his own operation instead.

Eventually, though, Burn was pushed out in favor of current Chair Marcel Groen although he’s never really gone away.

Now Chris Potter of the Post-Gazette is reporting that Burn is considering challenging Wolf in next year’s Democratic primary for Governor.

“There’s a lot of anger in the party out there with the failure of leadership to hold this state,” Burn told Potter. “It’ll be tough enough for an incumbent to win, and you don’t want a divisive primary that makes that even harder. Anyone who thinks the party doesn’t need a reboot, or that it hasn’t failed in paying attention to the demographics in Western Pennsylvania, is fooling themselves.”

Chairman Groen, not surprisingly, is unimpressed.