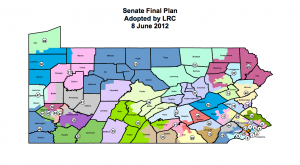 Good morning politicos, here’s the Buzz. The redistricting commission passed its final maps, both GOP-drawn; Dems endorsed gay marriage at their state committee meeting in King of Prussia; and a switcheroo looks likely in the race for Sen. John Pippy’s seat.

And we just got word that Mitt Romney is heading to PA on Saturday, June 16. The visit(s) will be part of his “Believe in America: Every State Counts” bus tour going through Iowa, Michigan, New Hampshire, Ohio, PA and Wisconsin. Barack Obama will be in Philly on Tuesday.

McCord Stands Out; Dems Say ‘I do’ to Gay Marriage: This weekend’s PA Dems state committee meeting was a mix of speeches and progressive platforms, with Sen. Bob Casey and Treasurer Rob McCord addressing the crowd and the party passing a pro-gay marriage resolution.

Mass Gov. Patrick Rallies PA Dems: PA Dems got Friday night what they had in surplus in 2008. Mass. Gov. Deval Patrick delivered a rousing speech that brought party leaders to their feet as he implored them to boldy campaign for President Obama and the party. He also talked about Obama’s recent remark about the private sector.

Redistricting Commission Passes GOP Maps: The panel charged with redrawing state House and Senate maps passed its final plan Friday, voting 4-1 to in favor of those submitted by Republican members.

6/8 Ups & Downs: Some polls guide this week’s Ups & Downs, lots of wrangling in Harrisburg, and the indispensible Ed Rendell.

Santorum’s Back, With a Brand New PAC: Former PA Senator and Republican Presidential candidate Rick Santorum announced Friday the launching of a fundraising group called Patriot Voices. This group largely carries on the fiscal and social conservative message he touted during the Republican primary season.

GOP Launches PR Blitz Against Medical Device Tax: House Republicans were joined by three-dozen Democrats to repeal part of the health care law: a tax on medical devices. The GOP has launched a full court press, saying opposition to the tax illustrates the illegitimacy of all of Obamacare. President Obama has threatened to veto the repeal.

Eaton Touts New Five Point Plan: Missa Eaton, a psychology professor at PSU Shenango and Rep. Mike Kelly’s Democratic opponent, took to the road Thursday to explain what she’d do in Congress. She toured several restaurants in the district to unveil her Five Point Plan.

Critz Keeps Up Medicare Strategy, Rothfus Fires Back: Rep. Mark Critz is still hammering the Medicare drum. Once in a blue moon can a politician find a single issue that can carry him or her through both a primary and a general election with equal efficacy. But after Keith Rothfus announced he’d be speaking at a Tea Party Express event in Pittsburgh Thursday evening, Critz went on the attack.

SD-37: The Democratic candidate in the race to replace Sen. John Pippy (R-Allegheny) is write-in winner Greg Parks. Or at least it is for now. Sen. Daylin Leach, the man charged with leading the Senate Dems’ campaign efforts, said Friday at state committee that the party planned to sub in another candidate (TBD) in Parks’ stead. Local Dem sources say it’s likely Rep. Matt Smith, who took office in 2006. The Republican candidate is businessman Raja.

SD-40: Former U.S. Rep. Melissa Hart may not be a shoo-in for her former Senate seat after all. (the one recently vacated by Jane Orie and scheduled for an Aug. 7 special election). The final PA Senate map out of the LRC basically renumbers the GOP-leaning 40th district and sticks it with Sen. Jim Ferlo (D-Allegheny), meaning a Republican candidate this cycle would have a real shot to win again in 2014. That’s why, the Trib reports, state Rep. Randy Vulakovich has thrown his name in contention for the nomination. Hart is still the frontrunner, but no longer a sure bet.

HD-31: Anne Chapman, the Republican seeking to unseat Rep. Steve Santarsiero (D-Bucks), announced her support of pension reform in the vein of SB 1540 or HBs 551 or 552. “I support the recent legislation introduced in the Pennsylvania House and Senate to move all new state worker hires and all new teacher hires to 401K style retirement accounts,” she said. Furthermore, “I will work to ban strikes for all public sector employees and to reform their health care plans.  I propose that we require all public employees, including teachers, to pay 25% of the cost of their health care premiums just like the taxpayers who pay the bills for our state and school district budgets currently do to.”

HD-89: Susan Spicka, the Dem running against Rep. Rob Kauffman (R-Franklin) has opened her campaign HQ in Shippensburg. Keystone Politics has the story.

HD-120: Pittston Politics says the political environment could be right for Rep. Phyllis Mundy (D-Luzerne) to have a tough race from GOP challenger Aaron Kaufer. Writer Joe Valenti notes that 48 percent of voters opposed Mundy in 2010.

HD-152: Ron Kolla has a great set of pipes. The man challenging Rep. Tom Murt (R-Montco) sang the national anthem at Democratic state committee this weekend. “If you campaign half as good as you sing, you’re going to get 90 percent,” quipped party Chair Jim Burn.