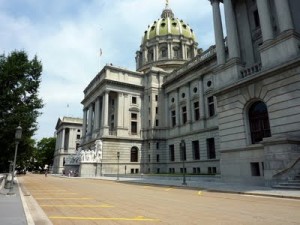 We have two new state House candidates, and the name of a third should be forthcoming. In the meantime, check out three new ads released Friday and last week’s Ups & Downs. And is Sen. Toomey the new Man in Black? Maybe not – but he has been everywhere, man.

Voter ID and Jon Stewart…The Saga Continues (Watch Video): Voter ID was controversial from the start, as has the House Majority Leader’s comments on it. Jon Stewart caught wind of the story this week, and decided to end his last broadcast until the RNC and DNC conventions on a high note – last night he took another jab at Turzai, the law and…Teg Nugent?

Sen. Toomey Has Been Everywhere, Man: Sen. Pat Toomey has put some serious mileage on his campaign bus in his first term. With a visit to The Holcombe Group in Sullivan County Tuesday, Toomey has now visited all 67 counties in Pennsylvania in less than two years in the Senate.

Keith Rothfus: Regular Guy (Watch Video): The same day the NRCC began running ads bashing Critz for his stance on Medicare and Obamacare, Keith Rothfus’ campaign has released a get-to-know-you ad showing the candidate and father of six as a regular, everyday guy.

Smith Blasts Obama, Casey “War on Coal” in Ohio: Republican Tom Smith has championed himself as a vocal opponent of President Obama’s energy strategy during his campaign against incumbent Rep. Bob Casey. And earlier today, he brought his message to neighboring Ohio – a move that left some wondering why he’s not campaigning here.

8/17 Ups & Downs: We’ve got one injunction, two bad votes and three marriages. Who had a good week, and who wishes they could take it back? Check it out.

Legislative Election Updates
HD-30: A Saturday meeting at the Hampton Township Community Center gave the Republican Party a new candidate to replace state Rep. Randy Vulakovich (R-Allegheny), who won a special election to fill ex-Sen. Jane Orie’s seat in SD-40. One was GOP State Committeeman Mike McMullen, who spoke to the committee first before withdrawing his name to support a man backed by Vulakovich and Allegheny County Chair Jim Roddey: Hal English. English is an attorney and Marine Corps veteran. “I was humbled and honored that I was nominated to be a candidate for the 30th House seat by my supporters. But, after careful thought, deliberation and prayer I chose to support Hal English for the nomination. I am a team player and we must maintain this seat in November. Hal is an honorable man and he has my full support on his election.”

HD-50: With DeWeese in jail and off the ballot, the Dems were free to name a replacement – and  Saturday they unanimously picked Greene County Commissioner Pam Snyder to replace him. “The big issue in this race is making sure that the people of Greene County and the rest of the district have good jobs and quality of life,” she told The Post-Gazette after the committee vote. “That’s what I’ve worked on for nine years as commissioner — to make sure people of this district have the opportunity to stay here.” Snyder lost a primary race against DeWeese two years ago, but will now face GOP candidate Mark Fischer.

HD-193: Dem candidate Mike Strausbaugh has withdrawn his candidacy, citing family issues. “After much thought and with input from family, friends and supporters I regretfully announce my decision to withdraw from the race for the Pennsylvania House of Representatives in the 193rd District,” he said in a statement. “I am grateful in ways I cannot express for the support of so many dedicated, wonderful campaign supporters and ask everyone for your understanding.” According to The Evening Sun a replacement from Adams County has been chosen by the York and Adams County committees, and was to have been approved Sunday by a vote of the party’s state executive committee. The name should be released today. That candidate will face Rep. Will Tallman (R-Adams).