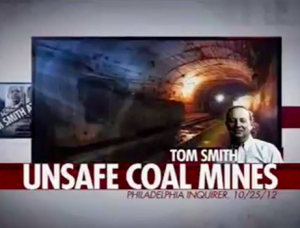 “He’s made a fortune running unsafe coal mines. 500 accidents and injuries. 2,000 violations. Fire hazards, faulty equipment,” says an announcer. “Now he’s running for Senate with plans that are dangerous for your family.”

But the hits on Smith’s record as a mine owner are new – and cuts to one of the biggest items on his resume.

Smith started a coal company in the 1980s after several years as a miner. He grew and expanded until his business comprised 5 companies and 8 mines. He sold the business in 2010, and the proceeds have allowed Smith to contributed over $17 million to his campaign thus far.

Coal has been a heavy part of his messaging, too.

“Tom became a coal miner, then mortgaged everything to build his own energy company,” said Smith’s first TV ad. And one of Smith’s most recent ads stars an out-of-work miner who blames Casey for the downturn in the coal industry.

His campaign dismissed Casey’s latest ad as a last-minute act of desperation – and another sign of the Senator’s antipathy toward coal mining.

The allegations in the ad sting, but it’s not clear whether Smith’s record as a mine owner is unusually unsafe. The mining industry has an inherent degree of danger and every operational mine has reported citations, accidents and injuries. It seems like the kind of ad that could be run against any coal mine owner.

Update: Marc Levy of the Associated Press researched Smith’s mine safety record and found that it was a mixed bag:

Tom Smith, the candidate for U.S. Senate in Pennsylvania who made a small fortune in the coal mining business, ran mines that routinely performed poorly on a federal statistic that measured workers’ days lost because of on-the-job injuries, federal mining safety records show.