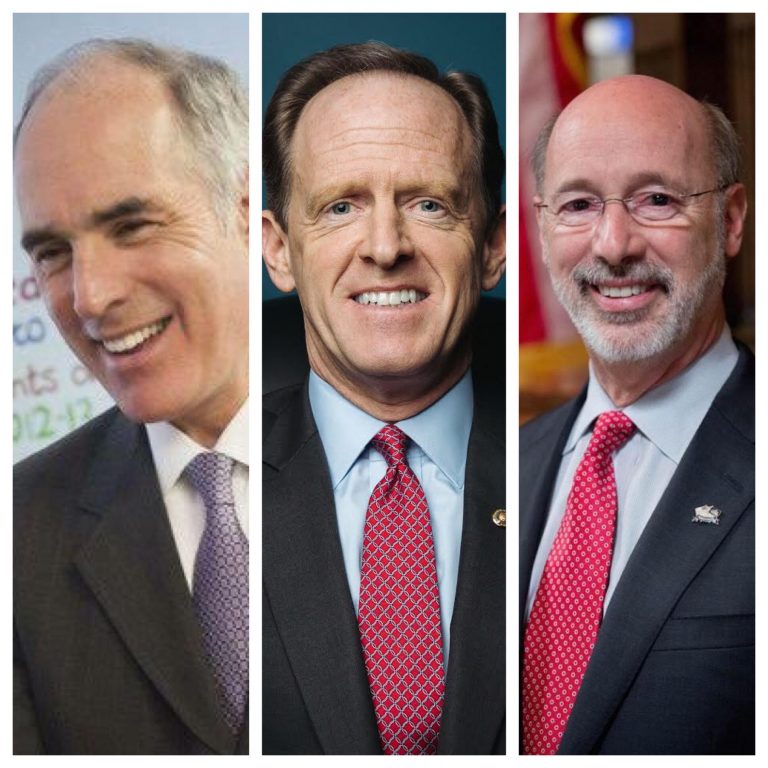 A half of a year ago, Pennsylvania’s three statewide elected officials stood in the middle towards the back of the pack in terms of favorability ratings according to a Morning Consult poll. In fact, after Q2 all three failed to crack the 50th percentile in popularity compared to their peers.

Entering 2019, momentum has swung in favor of the Democrats in the keystone state, while the lone elected statewide Republican makes some minor improvements in his ratings.

The market research company polled residents in all 50 states to determine the most and least popular Governors and Senators in the country at the end of Q4 in 2018. The rankings are determined by the total job approval number in descending order, rather than net approval.

Democrats Gov. Tom Wolf and Sen. Bob Casey coasted to double digit re-election victories in November and the numbers in the most recent polling reflect how the tides have turned in their favor.

Wolf ended 2018 with the highest net approval of the PA bunch, 20%. He ended the year with a 52% approval rating, with 32% disapproving and 16% having no opinion. After Q2, the incumbent Governor held only a 7 point net approval rating. This most recent ranking brings Wolf as the 20th most popular Governor in the nation.

Casey also ended 2018 on a high note seeing improvements in both approval and disapproval rating, ending 2018 with the lowest disapproval rating of the three. The senior Senator ended 2018 Q4 with a 17% net approval rating. 46% of Pennsylvanians polled approve of his job performance, while 29% disapprove and 26% with no opinion. Casey ends 2018 deadlocked with neighboring Democratic Sen. Sherrod Brown as the 49th most popular Senator.

Toomey did not have have to weather a re-election bid in 2018, but the junior Senator did see some minor improvements in favorability ratings ending the year. At the halfway point in 2018, Toomey was the only one of the three to hold a negative net approval rating, but he enters 2019 a couple points above water. Now, Toomey boasts a 3 point net approval rating, while he held a -4 approval rating six months prior. 37% approve of Toomey’s job performance, while 34% disapprove and 29% have no opinion. This would make Toomey the 90th most popular Senator.

If you flip the numbers around and rank in descending order of highest disapproval numbers, Toomey is tied for 33rd most unpopular, Casey ranks as tied for 62nd, and Wolf as tied for 26th. The biggest jump of the three in disapproval from the midway point in 2018 is actually Toomey who after Q2 was the 16th most unpopular Senator.

Keeping Up With The Neighbors?

In July, we peaked over the fence to see how our neighboring Governors and Senators fared and the story remains somewhat consistent with them. Some of the bordering states are towards the top of the list, while some are near the bottom of the list.

The most popular governor with a state bordering Pennsylvania still goes to Maryland’s Republican Gov. Larry Hogan. After Q2, Hogan was the second highest approved governor in the nation and he ended 2018 in the same position, with a 68% rating. Hogan’s net approval rating is 51 points.

There’s a new face for Governor holding the lowest approval rating bordering Pennsylvania. Halfway through 2018 it was Republican Gov. Jim Justice of West Virginia, but Democratic New Jersey Gov. Phil Murphy now holds the unwanted title with 44% approving his job performance. Justice leads Murphy by one point, although the Democrat from the Garden State holds a higher net approval rating.

Despite being awarded another six years in the Democrat friendly New Jersey, Sen. Bob Menendez is by far the least popular Senator neighboring PA. Just 33% approve of his job performance, with 45% disapproving and 22% holding no opinion. This list as Menendez even with Michigan’s Democratic Sen. Gary Peters as the lowest approval rating of any Dem in the Senate.

Who Is Looking To Move To 1600 Pennsylvania Ave?

No one from Pennsylvania or it’s neighboring states have officially declared a Presidential run for 2020, but quite a few have fanned the flames on some speculation.

This article was updated to correct the states that Booker, Brown and Gillibrand represent.