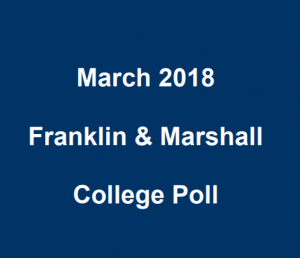 According to the poll, Wolf leads Laura Ellsworth 51-22, Paul Mango 49-22, and Scott Wagner 38%-21%.  Wolf performs lowest against Wagner, but Wagner performs below the other two Republicans in the state in a match up against Wolf.  Wagner’s heads-up against Wolf has the most undecideds, 35%, compared to Mango and Ellsworth, 25% each.

Wolf’s leads come partially from his job approval numbers, 43% say he is doing an “excellent” or “good” job, a five point increase over his numbers from September.  Wolf also has the advantage of 46% of voters saying the state in headed in the right direction compared to 40% who say the state is on the wrong track. This is the first time more people said the state is on the right track since 2009.

Casey holds a 43-25 lead over Barletta in the likely U.S. Senate match up.  The poll did not poll Casey against Barletta’s primary challenger, state Rep. Jim Christiana.

The poll gave some insights into messaging that will resonate with voters in the state, especially on gun control and climate change.

A slight majority of voters, 51%, disapprove of the way Pennsylvania has handled natural gas development.

The poll surveyed 423 registered voters in the state from March 19th-26th either online or through phone call, depending on each respondent’s preference in response to a letter sent ahead of the survey.  The margin of error is 6.8%.