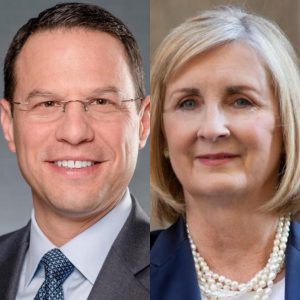 A Republican pollster finds the race for Attorney General closer than the only public survey of the contest so far.

A Trafalgar Group poll of likely voters in Pennsylvania shows AG Josh Shapiro leading GOP challenger Heather Heidelbaugh by just over 3 points, 46.7%-to-43.2%, while 5.3% are undecided.

That’s tighter than a Monmouth University poll of registered voters conducted in late August which found Shapiro with a 10 point lead, 51-to-41.

The poll was commissioned by the American Industry Project, a 501(c)(4) that doesn’t have a large online footprint. Its contact number matches a DC-area consulting firm called Huckaby Davis Lisker Inc. that has worked for a wide range of GOP candidates and causes. AIP played in the Republican primary for South Carolina governor in 2019, the Charleston Post & Courier reported.

As with any internal polling, its results should be taken with a grain of salt. 501(c)(4) groups aren’t allowed to coordinate with candidates, but they can commission polling. Releasing a poll to the public, particularly one that details successful messaging, is one legal way that 501(c)(4) help or advise favored candidates.

The Trafalgar Group poll tested variations on “defund the police” messaging. Its memo argues: “The defund the police question is a point of clear separation between the candidates. Undecided voters align with the Heidelbaugh supporter’s answer by a 2/1 margin. Those who gave an ‘opposed to defunding police’ answer represent 97.1% of Heidelbaugh’s results, while those who gave a ‘support defunding police’ answer make up 63.6% of Shaprio’s results.”

Shapiro has rejected calls to defund the police.

“These latest poll numbers prove what we already knew—career politicians like Josh Shapiro are vulnerable,” said Campaign Manager Ashleigh Pisarcik. “Pennsylvanians deserve an Attorney General that practices law, not one that plays politics. Heather Heidelbaugh will win this seat in November, and restore law and order in Pennsylvania.”

The Shapiro campaign did not immediately respond for comment.

The Cook Political Report has the race rated as Likely Democratic.

This poll surveyed 1,023 likely voters, collected data between September 15-19, has a +/-2.98% margin of error. It did not include a presidential head-to-head.