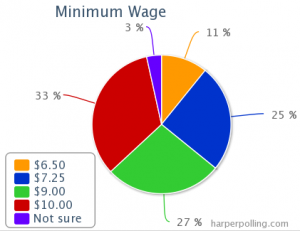 Likely voters overwhelmingly supported the transportation funding bill that was finally signed this fall, by a margin of 55% to 28%, and when asked about other possible legislation for 2014, the response was favorable.

The bill passed with bipartisan support, but there were serious concerns from the GOP on the tax and spending increases; however, Republican voters approve of the transportation funding package 46% to 35%. Approval flips among self-identified conservatives 38 to 41%.

The poll question emphasized the investment side of the bill but did not mention critics’ top complaint: the likelihood of a tax increase at the pump.

Respondents said they oppose Governor Corbett’s plan to privatize the state lottery 62% to 20%.

Despite these pro-worker results to the minimum wage question, respondents did not voice much support for unions. When asked who they trust when it comes to questions of Pennsylvania’s economic issues, 53% said that they trust businesses, 22% said labor unions and another 25% said they weren’t sure.

The poll also asked whether union members should have a right to not have their union dues spent on political activities with which they disagree, referred to by supporters as Paycheck Protection. Just 17% said they shouldn’t have this right, compared to the 66% who agreed that they should.

When analyzing these results, it’s important to note that Harper Polling is itself a Republican firm and is affiliated with Long Nyquist and Associates, a GOP consulting firm.

Wrapping up 2013, respondents were asked what the biggest news story of the year was. The roll out of Obamacare blew every other response out of the water, getting 61%. Other choices included transportation funding (18%), liquor privatization (12%), lottery privatization (6%) and Governor Corbett announcing his reelection campaign (3%).

Harper Polling also took a look at sports, asking how things are faring at Penn State, professional football team preferences and whether fans of the Eagles would let their daughter marry a Steelers fan.

59% of respondents said that, based on any information they’ve heard recently about PSU, things are improving. Just 12% who said things are getting worse.

Likely voters in Pennsylvania prefer the Steelers to the Eagles, 41% to 31%, though that had no effect on which team actually made it to the playoffs last week.

4% of respondents said they were Dallas Cowboys fans or, more likely, misunderstood the question.

Thankfully, very few respondents said that football allegiances would weigh in their decision to approve of their daughter’s marriage. The poll found that only 1 in 6 Steelers fan would not allow their daughter to marry an Eagles fans and the results are comparable when reversed.

Harper surveyed 604 likely voters via IVR with a plus or minus 4% margin of error between December 21 and 22. Party affiliation broke down to 43% Republican, 44% Democrat and 13% Independent or Other.