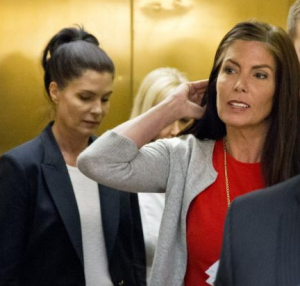 According to Steve Esack of the Morning Call, Kathleen Kane’s twin sister Ellen Granahan filed a wage and gender discrimination complaint against the Office of the Attorney General.

Granahan has worked in the AG’s office since 2008, years before her sister was elected.

When Granahan was promoted to chief deputy attorney general of the child predator division a few months into Kane’s tenure it sparked accusations of nepotism. That promotion included a twenty percent raise.

This is the first time Granahan has popped up since it was revealed that she was among those government officials sending lewd emails.

As Esack reports, it is possible that Granahan is motivated by two lawsuits she is facing, one from an ex-boyfriend and another from her former husband, over loans and her divorce settlement respectively that together total about $240,000.