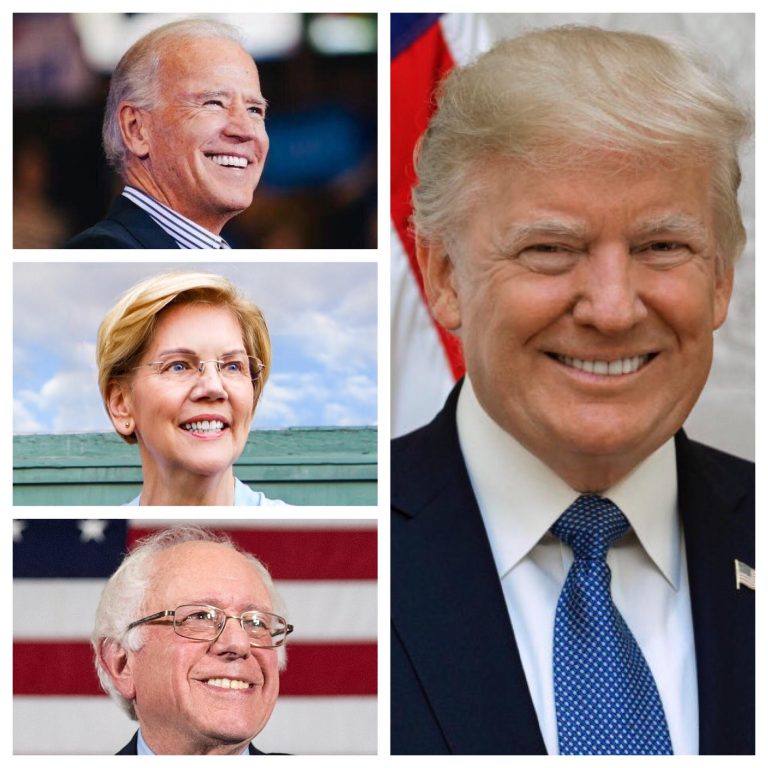 President Donald Trump’s one point victory over Sec. Hillary Clinton in Pennsylvania helped secure his ticket to the White House in 2016. A new Morning Call/Muhlenberg College poll shows another close race shaping up between Trump and the Democratic presidential frontrunners in the keystone state.

Sen. Bernie Sanders, who has emerged as the Democratic presidential frontrunner in recent weeks, is the lone candidate that bests Trump in a hypothetical head to head matchup, leading him by 3 points, 49-46. Former Vice President Joe Biden and Sen. Elizabeth Warren are both tied with Trump at 47-47. Sen. Amy Klobuchar and former South Bend Mayor Pete Buttigieg trail Trump by 1 point, with the Minnesota Senator trailing 45-44 and the former Mayor trailing 46-45. Trump’s largest lead in the head to head matchups comes against former New York City Mayor Michael Bloomberg, leading the fellow New York billionaire by 3 points, 48-45.

All of the head to head results fall within the margin of error.

The most recent polling is promising for Trump in comparison to the previous poll from the Morning Call/Muhlenberg College released in mid-November. In that poll, Trump trailed Biden by 9 points, 52-43, and also was behind Sanders and Warren, who both led the president by 5 points, 50-45.

Trump also received mixed reviews for the two most important issues on Pennsyvlanian’s mind in the upcoming election, the economy and healthcare.

In the hypothetical head to head matchups with Biden, Sanders, and Warren, the poll also included a breakdown of support from various regions of the state and other data. Trump’s largest deficit comes in Philadelphia in a matchup against Biden with the former Vice President garnering 84% of the vote, while Trump carries just 8%. Sanders leads Trump in Philly 85-11, while Warren bests the president in the state’s largest city 82-12. The Philadelphia suburbs provide a much different outlook for the president. Trump is locked in a tie with Biden in the Philly suburbs 47-47, while the president holds a 5 point lead over Sanders, 47-42, in this region of the state and leads Warren by 6 points, 48-42. The Democrats all hold double digit leads over Trump in Allegheny County with the largest lead coming from Sanders, who leads Trump by 29 points, 61-32, Warren with a 22 point advantage over Trump, 55-33, and Biden with the slimmest lead over Trump, carrying the county by 14 points, 56-42.

Trump boasts his strongest support in Northeast Pennsylvania where he bests all of the Democratic presidential candidates by at least 35 points. Trump’s largest lead in that area is over Biden, a Scranton native, beating him by 45 points, 67-22, while he holds a similar lead over Sanders in the area, besting the Vermont Senator by 42 points, 66-24, and Warren coming the closest, trailing Trump by 37 points, 63-26. The last region in the breakdown, titled “Remainder of State” Trump also holds double digit leads over the other Democrats, with his largest lead coming over Biden by 19 points, 57-38, followed by a 15 point lead, 56-41, over Warren, and besting Sanders by 13 points, 55-42.

This poll surveying 424 registered voters in Pennsylvania, collected data from February 12 to February 20, has a margin of error of +/-5.5 percent.

This poll paints a much more optimistic picture for Trump in comparison to a Quinnipiac University poll released last week that had Trump trailing all of the Democratic presidential frontrunners with the largest deficit being Biden by 8 points, followed by Klobuchar by 7 points, then Bloomberg by 6 points, Sanders and Buttigieg by 4 points, and Warren by 3 points.

The full data from the Morning Call/Muhlenberg College can be found here.