Obama Makes the Case for Hillary and Four More Years 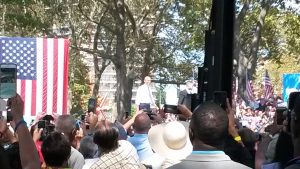 Barack Obama’s legacy, if not his name, is on the ballot one last time this November.

Third terms, or more precisely, the ability to hand off the White House to a chosen successor is one of the key determinants of whether a certain presidency is seen as transformative. Just such a presidency has been Barack Obama’s goal from the very beginning.

This desire goes all the way back to our first President, George Washington, whose famous Farewell Address was more about securing the selection of his Vice President John Adams than the isolationism.

Thomas Jefferson created a Virginia trifecta when his two terms were succeeded by eight-year stints from his two closest friends, James Madison and James Monroe.

On the other hand, Dwight Eisenhower and Bill Clinton were extremely distraught after watching helplessly as their Vice Presidents snatched defeat from the jaws of victory.

Suffice to say, now that he finds himself in the same situation, President Obama is prepared to work hard to elect Hillary Clinton.

Despite the historical precedents, though, this year the stakes are even higher for the President, as it is difficult to imagine there is a human being on the face of the Earth that Barack Obama has more contempt for than Donald J. Trump.

It oozed out of the nation’s 44th President at that infamous Correspondents’ Dinner, during press conferences and especially in the convention speech he delivered in this same city just a month and a half ago. To be fair, though, it’s tough to blame him.

After all, Donald Trump built his political persona on the conspiracy theory that the President was not born in America.

So it wasn’t surprising when in the midst of his speech to a few thousand supporters near the famous Art Museum steps, the President took the opportunity to let off some steam.

“Do you mind if I just vent for a second?” he asked a more than willing crowd. 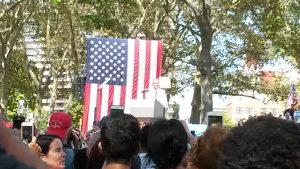 “There are serious issues at stake in this election, behind all of the frivolous stuff that gets covered every day. And let me just — let me just make a comment about that, because I — I, look –I am not running this time, but I sure do get frustrated with the way this campaign is coming. I’m just telling the truth,” he stated before motioning to the news cameras. “Guys in the back, I’m just telling you the truth about how I feel about this.”

“You don’t grade the presidency on a curve,” he continued. “Somehow as things go on because we’ve become so partisan, our standards for what’s normal have changed. And Donald Trump says stuff every day that used to be considered as disqualifying for being president.”

While Obama’s credulity over Trump took up a solid portion of his remarks (the admiration for Vladimir Putin was brought up), the President also sought to make a case for Hillary Clinton and the rest of the Democrats down the ballot.

Embracing the White House’s strategy to leave behind a stronger party in his wake, Obama made sure to go to bat for Democratic Senate nominee Katie McGinty, who helped introduce the Commander-in-Chief.

“Your candidate for the United States Senate — this is a special woman and she is going to do a great job — Katie McGinty is here!” he noted at the top of his remarks. He even paired PA’s junior Senator with the GOP’s presidential nominee later on.

“If you oppose raising the minimum wage, you should vote for Trump. You should also vote for Pat Toomey. A Trump-Toomey economy will be right up your alley.”

Obama also took the time to give a shout out to Josh Shapiro, the Democratic Attorney General nominee who has supported the President since 2008.

“And your candidate for attorney general, an old friend of mine, somebody who was with me early, early, early on — Josh Shapiro. Give Josh a big round of applause.”

The timing of this presidential trip turned out to be fortuitous for two reasons.

First, as I noted before the DNC, the Obamas and Clintons have developed a habit of helping each other out when they’re needed the most. In the wake of the kerfuffle over Hillary’s “basket of deplorables” comment and her unfortunate bout with pneumonia, the President got to carry the party’s banner today.

Second, some new statistics have bolstered the case he is making. For instance, a few days ago a Washington Post/ABC News poll had his approval rating at 58% and just today the U.S. Census released a report showing that median household income increased 5.2% in 2015. 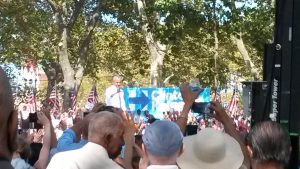 “Think about it: we fought our way back from the worst recession in 80 years, we turned around a declining economy, we helped our auto industry set new records, our businesses created 15 million new jobs, slashed our dependence on foreign oil, doubled our production of clean energy, made marriage equality a reality in all 50 states,” the President said as he ran down his Administration’s list of accomplishments. “We brought more of our troops home to their families. We delivered justice to Osama bin Laden. Through diplomacy, rather than war, we shut down Iran’s nuclear program, opened up a new chapter with the people of Cuba, brought nearly 200 nations together around a climate agreement that could save this planet for our kids and our grandkids. That’s what we’ve done.

“By so many measures, America is stronger and more prosperous than when we started out on this journey together,” he continued while moving to the Census report. “In fact, some of you may have seen, there was a new report just out today showing that last year, across every age, every race in America, incomes rose and the poverty rate fell. In fact, the typical household income of Americans rose by $2,800, which is the single biggest one year increase on record. We lifted 3.5 million people out of poverty — that’s the largest one year drop in poverty since 1968. The uninsured rate is the lowest it has been since they kept records; the pay gap between men and women shrank to the lowest level ever. Now, let’s face it, Republicans don’t like to hear good news right now, but it’s important to understand this is a big deal. More Americans are working, more have health insurance, incomes are rising, poverty is falling.”

“And gas is $2.00 a gallon. Thank you for reminding me!,” he responded before letting a beat pass. “Thanks Obama!”

The President’s poked fun at that meme before but this time felt different, on this occasion he meant it. There’s nothing that would mean more to him than to have his chosen successor defeat his most virulent critic. Such a vote of confidence from the nation would be the ultimate “Thanks Obama!”