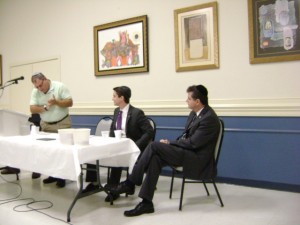 After months of waiting, the two PA-8 candidates finally met in the first candidate forum of the race.

Rather than a formal debate, this event involved each candidate being read a written question from the audience. The other candidate was then granted a response. Bracketed by opening and closing statements each recipient was allowed two minutes to answer a question directed to them and one minute to respond their opponents remarks. There were eight questions in all.

Congressman Fitzpatrick talked about his personal history in his opening, emphasizing that he was a life-long resident of Bucks County. This was a not-so-subtle jab at Strouse who was born in Delaware County and previously lived in D.C. while working for the CIA.

Strouse also used his opening to introduce himself. He mentioned his military service in Iraq and Afghanistan and his work in the CIA Counter-Terrorism Center.

“For me, it’s always been about putting country and community ahead of myself,” he said.

Fitzpatrick spoke first about his accomplishments concerning making college more affordable. He even made a point to bring up his work with the Obama Administration on this subject.

“I can tell you a long story about a conversation I had with Vice President Joe Biden here in Bucks County. He and I agree on a lot of the issues,” the GOP Congressman said while detailing his work on tying subsided student loan interest rates to ten-year treasury notes.

Strouse’s first question concerned immigration and securing the border. He called for a “path to residency” rather than a “path to citizenship”. The former Army Ranger also brought up his experience on the Afghanistan-Pakistan border and that this experience taught him immigration is the symptom of larger problems in neighboring nations.

“As a matter of fact, [President Obama] has invited chaos on the Southern border,” he asserted.

The Congressman was then asked about the Affordable Care Act and whether he felt it hurt the country. Fitzpatrick talked about his experience fighting cancer as the healthcare debate took place and laid out his view that the government should be less involved. He also criticized the act itself and the way it was passed.

“There wasn’t a single Republican vote which meant there wasn’t really any effort to bring Republican ideas into reform,” he said.

Strouse tentatively embraced healthcare reform, criticizing Fitzpatrick for voting so many times to repeal it while also saying the ACA “was not a perfect law.”

Next, the Democratic candidate was asked about whether he supports the President’s policy towards ISIS. Strouse divided the answer into two and examined the actions concerning Iraq and those concerning Syria.

He agreed with the Administration’s actions in Iraq but countered that the President “fumbled” in Syria and commented that aid should have been sent to Syrian rebels “years ago.” Former Secretary of State Hillary Clinton famously articulated this view in an interview with Jeffrey Goldberg a few weeks ago.

Rep. Fitzpatrick also criticized the President for a lack of decisiveness in terms of his strategy.

The Congressman then fielded a request about obtaining housing vouchers for homeless veterans and described his recent work on the subject. He also identified homelessness as a symptom of a larger problem that the V.A. needs to solve.

Strouse discussed how the Veterans Administration has been undersourced for years and put under extreme stress after the Afghanistan and Iraq Wars. He called for fundamental reforms of the agency.

The first-time candidate was also asked about protecting Israel against attacks from Gaza.

“Israel is our Number 1 ally in the Middle East,” Strouse began.

He then talked about how one party (presumably Hamas) in the Palestinian Authority doesn’t recognize Israel’s right to exist and that this fact makes the peace process more difficult.

Fitzpatrick agreed a two-state solution is the best option but also blamed hard-liners in the Palestinian Authority. Again, he was likely referring to Hamas although neither candidate mentioned the group, which currently controls the Gaza Strip.

The next question brought up Fitzpatrick’s support from Gabby Giffords gun-control group and wanted to know how he would convince other congressional Republicans to support these measures. The Congressman brought up his efforts to reach across the aisle and his affiliation with the group “No Labels” while also pointing to his own gun control bills.

Strouse then addressed the widespread support for improving background checks and keeping guns away from mentally ill individuals.

How Do You Change Congress

Finally, Strouse was asked how he would change that ever-unpopular institution of Congress. The Democratic nominee said he felt it was a matter of time, that if Congress would spend more time and effort on the issues they would get the job done.

At this point, Fitzpatrick threw the first direct punch of the forum when he asserted that Strouse moved to the district simply to run for Congress. Therefore, Strouse’s answer didn’t make any sense because if he was seeking to bring bipartisanship to Congress he should have chosen a district with a more partisan representative.

Strouse countered in his closing statement that Rep. Fitzpatrick had voted for the sequester, dozens of attempts to appeal the ACA, and the government shutdown. The newcomer ridiculed Congress as the “least productive” in history. He said he “didn’t intend to get into politics” but was inspired to run by his two young children.

The Congressman mentioned he would soon be a grandfather and expressed his worry about his grandkids and the $17 trillion national debt. Fitzpatrick also said that the sequester was “a brainchild of the White House”. Finally, he mentioned his Four Point No Labels plan.

Overall, both candidates gave similar performances. Fitzpatrick’s experience with these events, though, was evident. For example, he knew that he could reasonably talk past his time limit while Strouse often left time on the clock in order to not go over. Neither used or took notes and gave each response while pacing in front of, and among, the audience.