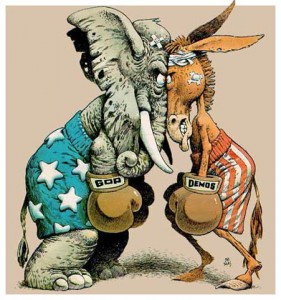 TV ads, abortion, white nationalism, and more. Could election week get any crazier? There have been tons of updates from dozens of competitive state House and Senate primaries. Here’s the latest from races around the state.

Editor’s note: We will include these, and any additional updates that catch our eye, in Monday’s Buzz. If you notice a story or update that’s missing, please email it to press@politicspa.com.

Capitol Ideas has a look at the 6 state House special elections on Tuesday and what they could mean for either party, and more!

SD-15: John McNally is a heavy favorite for the GOP nomination to replace retiring Sen. Jeff Piccola. Long shot Republican opponent Josh First unveiled this weekend the “McNally Meter,” which highlights the fact that First is being out-spent 22 to 1. He also dings the former Dauphin GOP chair for the drop in GOP voter registration during his tenure (though omits the party’s decisive success in the 2009, 2010 and 2011 cycles).

SD-15: The Patriot-News takes a look at the two Democrats vying for the nomination in Piccola’s seat, Alvin Taylor and Rob Teplitz. Dem insiders are strongly pulling for Teplitz, who they think has a strong chance to win the seat in November.

SD-29: Two news articles profile Sen. Dave Argall (R-Schuylkill) and challenger Brian Rich in one of the hardest-fought primaries in PA. Meanwhile, the Associated Builders & Contractors and the Pennsylvania Builders Association have both backed Argall. “Senator Argall has been a true friend to the home building industry,” said PBA President Warren Peter.  “That is why it is my privilege to let you know that the Pennsylvania Builders Association is endorsing you for the 29th Senatorial seat.”

SD-31: Our Cumberland County Republican friends have gotten about a million mailers in the race between Sen. Pat Vance and Andrew Shaw (about 10 from Vance; 4 favoring Shaw). The latest comes for Shaw, from the Family Research Council’s PAC in DC, hammering Vance for her moderate stances on gay marriage and abortion.

SD-33: White nationalism? “Taylor said he had agreed to help his friend, [William] Regnery, to raise money to start a ‘respectable, academic’ organization that would review the effect of public policy on whites,” reports the Chambersburg Public Opinion. Turns out James Taylor, who is running a write-in campaign against Sen. Rich Alloway (R-Franklin), has myriad connections to several white nationalist groups. The PO has a more detailed review of the race, and Alloway’s 10-1 fundraising advantage, here.

SD-37: Things in this race have really hit the fan. The Post-Gazette ed board actually pulled its endorsement of Mark Mustio over a flyer they said was racist (view it here). This came just a day after Mustio called for a ceasefire on negative ads with main rival Raja, which itself came a bit after Mustio-backer Rep. Tim Murphy offered some kind words for Raja, and shortly before Allegheny GOP Chair Jim Roddey made the same request – a ceasefire. Mustio had been hammering Raja over outsourcing and being Indian, Raja blasted Mustio for voting for the 2005 legislative pay raise.

HD-31: Anne Chapman is hitting Helen Bosley over her past employment with Planned Parenthood. The two Republicans are vying to face Rep. Steve Santarsiero (D-Bucks). GrassrootsPA has the mailer (PDF).

HD-92: The Citizens Alliance for Pennsylvania (CAP)? They’re the ones infamously targeting moderate GOPers in Harrisburg. The Conservatives Alliance of Pennsylvania (CAP)? They’re new. And they’re going after Mike Regan in the race for Rep. Scott Perry’s (R-York) seat. You can see their mailer (front and back) here. Said CA(f)P spokesman Leo Knepper: “This is just pure dirty politics. The claims made in the mailer are completely false, saying that Mr. Regan worked for Obama because he happened to be at the justice department while the president was in office is ludicrous. That someone would use the credibility that we have built for CAP in order to lend credibility to these spurious claims is beyond the pale. We are consulting with legal council and will pursue legal action if viable. Furthermore, we will work to determine who is behind this sham organization and expose them as the frauds they are.”

HD-93: Linda Small, the former weather forecaster hoping to take on Rep. Ron Miller (R-York), says PA should scrap its fuel subsidies. “Ending the $2.9 billion fossil fuel subsidies PA gives each year and moving quickly to renewable energy and efficiency will create 21st century jobs, keep our energy dollars in the state, and have many other positive effects,“ she said.

HD-113: Can he get an extension? Turns out Rep. Kevin Murphy didn’t actually graduate from the University of Scranton, as he has maintained for decades. He acknowledged Friday that he doesn’t have a degree, after primary opponent Marty Flynn and a supporter uncovered the issue. Murphy says he’s one final paper short of officially graduating, and will compete it this week. Additionally, the Scranton Times-Tribune ed board endorsed Flynn.

HD-117: The HRCC is stepping in to thwart a Dem write-in candidate seeking to get on the ballot against Rep. Karen Boback. This mailer (front and back) to Dems asks them to write in Boback (instead of Mark “Duke” Barrett, the Dem who came up short on petitions). Not that Republicans have much to worry about. Boback took over 81 percent in 2010 and 71 percent in 2008.

HD-157: Former Rep. Paul Drucker isn’t wasting any time setting up his rematch with Rep. Warren Kampf (R-Chester). On Wednesday, he’ll have his official campaign kickoff at his office in Phoenixville. Here’s his website.

HD-197: The Daily News takes a look at the complicated race to replace now Philly Sheriff Jewell Williams. The special election candidate, Gary Williams, is not on the primary ballot, but Jewel Williams is. That’s Jewel with one ‘L,’ the Councilman’s daughter.