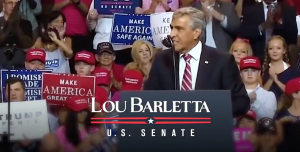 Barletta’s second television advertisement shows the GOP candidate for Senate alongside Trump at a MAGA rally, held earlier this month in Wilkes-Barre, PA.

“We want to secure our borders, we want to put an end to illegal immigration once and for all,” Barletta says in the ad. “And we want to take a knee to pray and stand for the flag.”

In the 30 second advertisement, titled ‘Rally’, Barletta also touts support for law enforcement and veterans before he echoes the well known Trump talking points at rallies and concludes the address by linking his candidacy to Trump’s agenda.

The Barletta campaign dubbed Casey as beholden to “liberal handlers” in a comment promoting the ad.

“Congressman Lou Barletta will stand up for the people of Pennsylvania on the issues that matter to them,” said campaign spokesman, David Jackson. “While Lou’s radical opponent Bob Casey only works to please his liberal handlers in Washington, Lou Barletta has never turned his back on the people of Pennsylvania. Lou Barletta will take care of our vets, honor our military, secure the border, and give our law enforcement and first responders the respect they deserve.”

PoliticsPA is seeking comment from the Casey campaign and will update the story.

In Casey’s most recent ad, released a couple of weeks ago, the incumbent attacks Barletta over Social Security and Medicare funding.

The story was updated with a comment from the Barletta campaign.