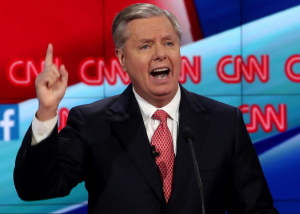 The road to Pennsylvania Avenue runs through the Keystone State.

That was the message of tonight’s Lincoln Day Reception as the PA GOP kicks off the presidential election year of 2016.

While the presidential contest loomed large, the focus of the event was Pat Toomey’s re-election effort.

Toomey introduced his colleague, who he asserted was the funniest person in the Senate, even over former comedian Al Franken. Pennsylvania’s junior Senator also pointed out that his 2010 victory was the closest Senate race in the the nation that year and he would need a similar effort to emerge from 2016 victorious.

When Graham took the stage he humbly praised Toomey, calling him the smartest Senator in Washington. He also cracked some early jokes about a South Carolinian coming to Pennsylvania and his new phone.

Over the next half-hour Graham gave a funny and fiery speech that pleased the partisan crowd. He began by painting Toomey as a leader of the upper chamber.

“Somebody has to be willing to do the big things in the Senate,” Graham said. “How do you get this deep into debt? Bipartisanship. How do you get out? Leadership.”

“We’re on the road to becoming Greece, Pat’s gonna help us get off that road.”

Sen. Graham then transitioned to the 2016 presidential race and a dissection of the three Democratic candidates.

“Their No.1 [candidate] said she was ‘dead broke’ after leaving the White House. That’s probably why they stole the china,” he stated. “Their No.2 went to the Soviet Union on his honeymoon and I don’t think he ever came back. Their No.3 was the Mayor of Baltimore. You want to be like Baltimore?”

The Senator moved on to his favorite topic, national security.

“How do you save this country from another 9/11? We keep the fight over there,” Graham declared. “I believe Hillary Clinton is disqualified because of Benghazi.”

He went on to praise Michael Bay’s new film 13 Hours, which is about the night of the Benghazi attacks.

“There’s a movie coming out tonight, I urge you to watch it!”

After dropping out of the race last month and despite endorsing Jeb Bush this morning, he side-stepped the primary and sought to soothe any divides.

“The only way we can lose this election is if we beat ourselves up so much that we can’t come back together.”

Graham ended with on his call for party unity and emphasized how important the Keystone State is to Republicans’ hopes in D.C.

“If Pat wins, that closes the deal for the Senate majority.”

As for the presidential race?