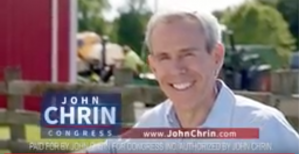 On Monday, GOP candidate John Chrin of Pennsylvania’s newly drawn 8th Congressional District  released his first campaign ad of the general election cycle against incumbent Rep. Matt Cartwright (D-Lackawanna). This ad comes out just one day after 2Q filings were made available from the FEC, which shows Chrin’s significant self-funding.

In the 30 second advertisement, Chrin credited his upbringing in Northeast Pennsylvania for giving him the “tools” to succeed in Congress.

“In Congress, I’ll put those tools to use for us; fighting for good paying jobs, quality affordable healthcare, and banning sanctuary cities,” Chrin says in the ad.

Cartwright’s campaign says they aren’t worried about the advertisement.

“I have not seen it yet,” said Colleen Gerrity, Campaign Manager, Cartwright for Congress. “Does Mr. Chrin from New Jersey explain why he wants to cut social security benefits while raising taxes on social security at the same time?”

The Chrin campaign ad comes out at a time where it believes it is gaining momentum. Last week, Inside Elections changed the status of the race from “Likely Democrat” to “Leans Democrat”. Chrin was also named a “Young Gun” by the National Republican Congressional Committee.

Thus far, Chrin has loaned his campaign $900,000, some spent before the GOP May primary, with $205,000 of it from late April to the end of June. Despite these large self-funding numbers, Cartwright’s campaign nearly doubled their campaign in money raised and cash on hand after 2Q filing.

From late April to the end of June, the Cartwright campaign raised slightly over $280,000 while the Chrin campaign brought in close to $110,000.

The newly drawn 8th district went for President Trump by close to 10 points.