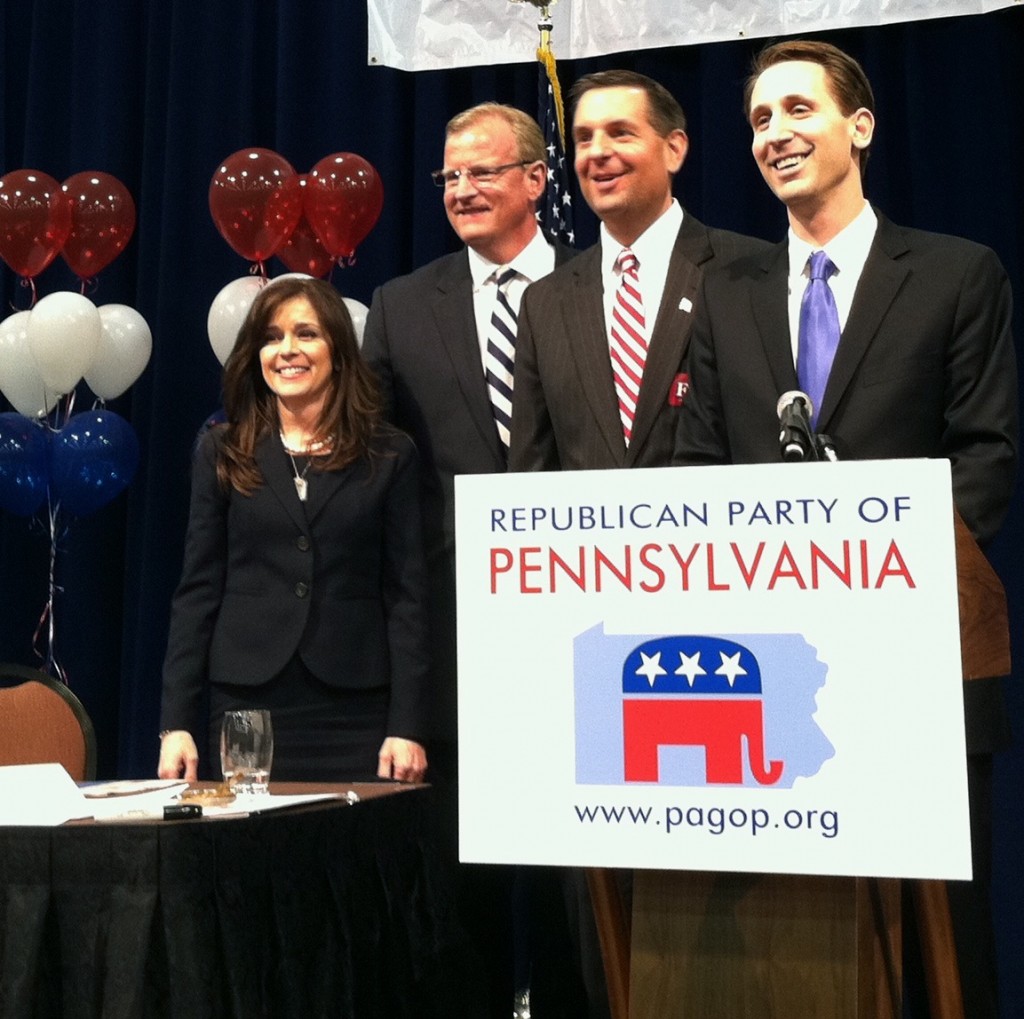 The Pennsylvania Republican Party endorsed Steve Welch for U.S. Senate in its first ballot Saturday. The victory followed several heated days of vote whipping by the Corbett and his political team.

“It’s an incredible honor for to stand before you as the Republican Party endorsed candidate for the United States Senate,” Welch said. “I can promise you that I will make you proud of the decision you made here today.”

As he has done for much of the campaign, Welch hammered U.S. Senator Bob Casey, the man he hopes to replace.

“I won’t ever let him get away with telling Pennsylvanians he’s an independent voice.  Bob Casey is nothing more than a rubber stamp for Barack Obama and Harry Reid’s big government, job killing liberal agenda,” Welch said.

The Chester County entrepreneur scored a surprisingly quick win after intense rumors of a move for an open primary. The question whether to endorse in the Senate primary won approval 201 to 140.

In the end, aside from a handful of defections in Montgomery County, almost all of the southeast Pa. caucus fell in line behind Welch.

Burns, a businessman from Washington County, had the most disappointing day of any candidate. His final total at state committee was lower even than the total of straw poll votes he received at various regional caucuses in January. Much of his support from southwestern Pa. migrated to Welch, at least in part thanks to the Governor’s lobbying efforts.

Burns and his campaign left quickly after the results; he has previously said it would be “very hard to run against an endorsement.” A spokesperson said Burns was in the race for now, and that a statement would be coming shortly.

Rohrer, a former state Rep. and 2010 gubernatorial candidate from Berks County, actively campaigned against holding an endorsement and will continue in the race.

In his remarks, Welch preempted what is likely to be a central theme of the primary going forward: his 2006 party switch and 2008 vote for Barack Obama in the Democratic primary (he voted for McCain in the general election).

“From the very first day I launched my candidacy, I’ve been completely open with the voters and with the people in this room about my own partisan history,” he said.

“But when I took one look at the extreme agenda coming from Obama, Casey, Reid, and Pelosi, I came back to the Republican Party with a vengeance.  But I didn’t just commit to being a Republican.  Partisanship is not what matters most to me.  I dedicated myself to making sure our party never again strayed from our principles.”

“This race is now clearly now a race between an Obama-Sestak liberal, and a consistent, lifelong conservative,” Harris said.

“…a consistent, lifelong Democrat,” quipped Brian Nutt, Tom Corbett’s 2010 campaign manager who is a consultant for Welch. He was a member of the Governor’s political team whipping votes late into Friday night.

“That’s fine, we can have that argument,” Harris replied. “The gloves are off now.”

Welch’s campaign manager Peter Towey echoed Nutt’s criticism that Smith, too, has a long history in the Democratic party. Smith was a registered Democrat until 2011, and briefly served as a Dem county committeeman (he was kicked off for supporting Republicans).

“I’m happy we did as well as we did. We’ve only been at this for three and a half months in earnest. To come in second place – I think that’s terrific. We’ll build on that and we’ll go from there,” he said.

Welch was equally direct in his gratitude for Corbett.

“Governor Corbett will not get an ‘I love you,’” Welch said after thanking his family, “but he certainly will get a ‘thank you.’ His support has been incredibly important in this process.”

Earlier in the process, Welch said he would respect the process “if it is organic.” Asked about criticism that the Governor’s strong lobbying efforts were inorganic, Welch deferred.

“This had everything to do with people supporting the candidate they want. I think that’s a great process,” he said. “We are fortunate; certainly the Governor’s endorsement is a big help because people respect the Governor.”

Corbett, who endorsed Welch a few weeks ago and personally lobbied state committee members on his behalf Friday night, implored the party to make an endorsement.

“I strongly believe in the endorsement process, and I urge you to support candidates today,” he said to state committee.

He rebutted critics who said the party was seeking to run the process from the top down. An array of Tea Party groups who held an anti-endorsement counter press conference across the hotel, and they congregated in the back of the room to loudly cheer for committee members who spoke against endorsing.

“It is an open primary. Anyone can sign up.”

As to why he backed Welch, Corbett repeated cited geography.

“They’re qualified,” Corbett said of his ticket. “There are a lot of qualified candidates. The differences is, who can win in November.

He said he wants a ticket that could be supported by Democrats, independents, and “liberal or moderate Republicans, when they vote for President Obama – although I don’t think they’re going to.”

David Christian, a veterans’ advocate from Bucks County, and John Kensinger, a pharmacist from Bedford, were not nominated on the floor. Each has said he will remain in the race.

Scaringi, too, has said he will remain in the race – though his consultant Jason Fitzgerald is leaving the campaign and will support Welch.

State Rep. John Maher (R-Allegheny) easily won endorsement over former Pa. Community Bankers CEO Frank Pinto, 270 votes to 46. Pinto said he would stay in the race, and even said he would refuse the endorsement if it were offered him.