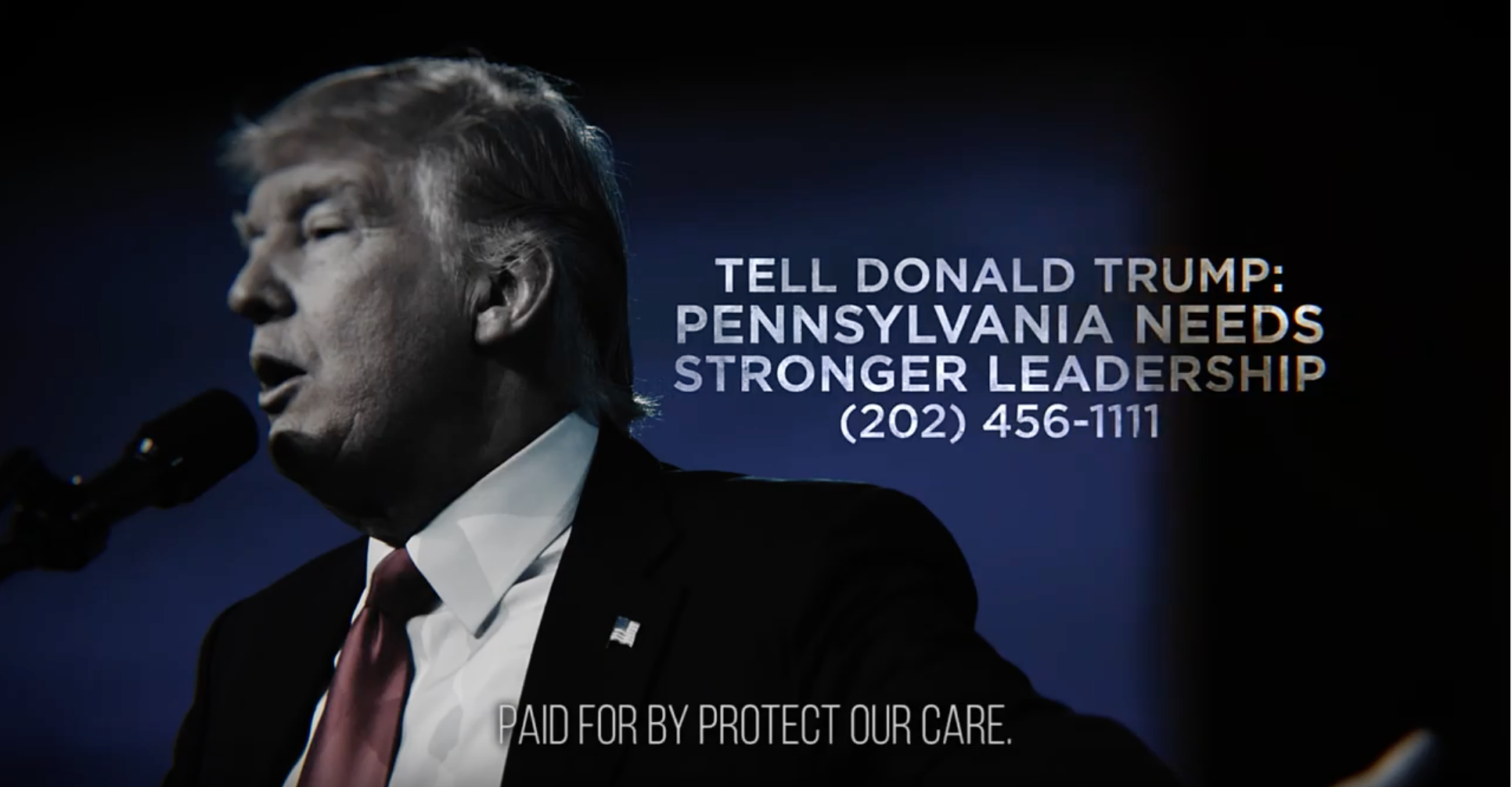 Protect Our Care, a Democratic healthcare group that promotes the Affordable Care Act, is launching a five figure ad buy in Pennsylvania, Michigan, and Wisconsin attacking Trump over the coronavirus.

The 30 second spot, which began airing today and will run for the remainder of the week and into next week, will air on cable in the Philadelphia media market.

“President Trump’s failure to protect America for the coronavirus crisis has made Pennsylvania less safe,” a voiceover says at the beginning of the ad.

The ad includes different news headlines from newspapers around the state, criticizing Trump for Pennsylvania not having “nearly enough tests,” the conditions of hospitals to address the pandemic, and the economic impact it is having on the state.

“At a time of extreme crisis, Pennsylvania families need a steady and trusted leader, but Donald Trump has failed that test,” the voiceover says at the end of the ad. “Call the White House, tell President Trump that Pennsylvania needs stronger leadership.”

The Republican National Committee lauded Trump’s response to the virus, claiming that his leadership has saved lives during the pandemic.

In defending Trump’s reaction to COVID-19, Republicans have touted the travel ban to China, partnership with the private sector for equipment, and the stimulus bill that passed through Congress to offer aid to those impacted by the coronavirus in the United States.

President Donald Trump has received mixed reviews in Pennsylvania over the virus, according to recent polling.

According to a Baldwin Wallace University Great Lakes Poll, in partnership with Oakland University and Ohio Northern University of self identified registered voters, released last week, just over half of Pennsylvanians, 52.2%, either strongly or somewhat approve of Trump’s handling of the coronavirus, while 42.5% say that they either strongly or somewhat disapprove. However, a Public Policy Polling poll released this week showed that 46% of Pennsylvanians approve of Trump’s handling of the coronavirus pandemic, while 49% disapproved.

Gov. Tom Wolf received high marks for his response to the pandemic in both polls.

Several Democratic backed groups have already hit the airwaves slamming Trump on this topic. Priorities USA and American Bridge both launched ads campaigns in Pennsylvania criticizing Trump on the matter.

On the GOP side, America First Action PAC is launching a $10 million digital, cable, broadcast, and mail ad campaign attacking Democratic presidential frontrunner, former Vice President Joe Biden, in Pennsylvania, Michigan, and Wisconsin. Of the $10 million committed for the three state ad buy, $5.5 million will be spent in Pennsylvania, which is the highest total of the three included in this ad campaign.

While Protect Our Care is just joining the action on the Pennsylvania airwaves on this topic, they’ve boosted Democrats and attacked other Republicans in the state over the past few years. In the Fall of 2019, the group launched a multi-million dollar digital ad campaign that included ads supporting Rep. Susan Wild (D-Lehigh), while also slamming Reps. Mike Kelly (R-Butler) and Scott Perry (R-York) in the Spring of 2019 in a digital ad campaign over protecting pre-existing conditions.